Ten Hours Until Dawn: The True Story of Heroism and Tragedy Aboard the Can Do (Paperback) 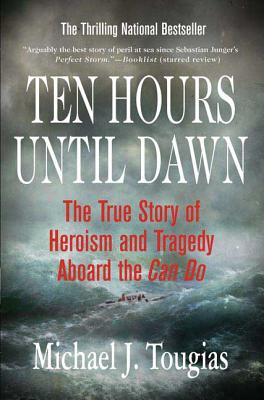 Ten Hours Until Dawn: The True Story of Heroism and Tragedy Aboard the Can Do (Paperback)

In the midst of the Blizzard of 1978, the tanker Global Hope floundered on the shoals in Salem Sound off the Massachusetts coast. The Coast Guard heard the Mayday calls and immediately dispatched a patrol boat. Within an hour, the Coast Guard boat was in as much trouble as the tanker, having lost its radar, depth finder, and engine power in horrendous seas. Pilot boat Captain Frank Quirk was monitoring the Coast Guard's efforts by radio, and when he heard that the patrol boat was in jeopardy, he decided to act. Gathering his crew of four, he readied his forty-nine-foot steel boat, the Can Do, and entered the maelstrom of the blizzard.

Using dozens of interview and audiotapes that recorded every word exchanged between Quirk and the Coast Guard, Tougias has written a devastating, true account of bravery and death at sea, in Ten Hours Until Dawn.

"Arguably the best story of peril at sea since Sebastian Junger's Perfect Storm. His balancing of human and technical detail is nearly perfect, and he has made the book accessible even to relative newcomers to maritime literature. All readers may sincerely hope that Tougias will produce further such superb chronicles.” —Booklist, starred review

“Ten Hours Until Dawn is every bit as gripping as the best adventure fiction.” —Midwest Book Review

“The events (of that night) are chronicled masterfully in Tougias' gripping new book, Ten Hours Until Dawn.” —Offshore Magazine

“This is a riveting, fast-paced story will keep you awake at night and stay in your mind days after it's finished.” —South County Independent

“A fascinating story and just as good as The Perfect Storm.” —Portsmouth Herald

“Ten Hours Until Dawn reads so much like a fiction thriller that I had to pause now and then to remind myself the events were real.” —Portland Herald ""Maine Today""

“Tougias spins the yarn with tense realism and you'll find yourself turning the pages at an alarming rate.” —The Valley Advocate

“I was a college senior in Providence, Rhode Island, during the Blizzard of '78---a meteorological holocaust of snow and wind that I'll never forget. To learn twenty-six years later that there were men brave enough to attempt a rescue at sea during that storm still has me awestruck with wonder. Michael Tougias's Ten Hours Until Dawn tells their story---an incredible tale of heroism and sacrifice.” —Nathaniel Philbrick, author of the National Book Award winner and New York Times bestseller In the Heart of the Sea

“With a steady hand, Michael Tougias draws us into the vortex of this historic winter storm of 1978 and a high-seas rescue attempt gone wildly awry. The dynamics of this adventure alone would make it well worth the journey. But as a writer, Tougias's true gift is his ability to plumb the depths of human emotion, to take us ever deeper into the hearts of those who survived the ordeal---and even into the lives of those who did not. He re-creates not only the superhuman efforts between the imperiled crewmen and their would-be rescuers, but the gut-wrenching experience of their loved ones waiting helplessly ashore. In this he clearly succeeds. We come away feeling that we know these people, that we understand what it must have been like for them, and our hearts go out to them.” —Spike Walker, bestselling author of Coming Back Alive and Working on the Edge

“What a story! Tougias's research and writing make the reader feel as if he is onboard the Can Do during the Blizzard of '78. Ten Hours Until Dawn is a gripping book about a fascinating event of courage and tragedy that few people, including those of us who were deeply involved in fighting that storm, know enough about.” —Michael Dukakis"