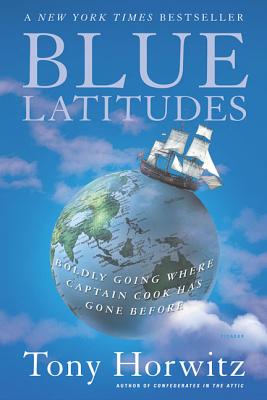 In an exhilarating tale of historic adventure, the Pulitzer Prize-winning author of Confederates in the Attic retraces the voyages of Captain James Cook, the Yorkshire farm boy who drew the map of the modern world

Captain James Cook's three epic journeys in the 18th century were the last great voyages of discovery. His ships sailed 150,000 miles, from the Artic to the Antarctic, from Tasmania to Oregon, from Easter Island to Siberia. When Cook set off for the Pacific in 1768, a third of the globe remained blank. By the time he died in Hawaii in 1779, the map of the world was substantially complete.

Tony Horwitz vividly recounts Cook's voyages and the exotic scenes the captain encountered: tropical orgies, taboo rituals, cannibal feasts, human sacrifice. He also relives Cook's adventures by following in the captain's wake to places such as Tahiti, Savage Island, and the Great Barrier Reef to discover Cook's embattled legacy in the present day. Signing on as a working crewman aboard a replica of Cook's vessel, Horwitz experiences the thrill and terror of sailing a tall ship. He also explores Cook the man: an impoverished farmboy who broke through the barriers of his class and time to become the greatest navigator in British history.

By turns harrowing and hilarious, insightful and entertaining, BLUE LATITUDES brings to life a man whose voyages helped create the 'global village' we know today.

Tony Horwitz is a native of Washington, D.C., and a graduate of Brown University and Columbia University's Graduate School of Journalism. He worked for many years as a reporter, first in Indiana and then during a decade overseas in Australia, Europe, Africa, and the Middle East, mostly covering wars and conflicts as a foreign correspondent for The Wall Street Journal. After returning to the States, he won the Pulitzer Prize for national reporting and worked as a staff writer for The New Yorker before becoming a full-time author.

Horwitz has been a fellow at the Radcliffe Institute for Advanced Study at Harvard University and a visiting scholar at the John Carter Brown Library at Brown University. He lives with his wife, Geraldine Brooks, and their son, Nathaniel, on the island of Martha's Vineyard in Massachusetts.

“Thoroughly enjoyable. No writer has better captured the heroic enigma that was Captain James Cook than Tony Horwitz in this amiable and enthralling excursion around the Pacific.” —Bill Bryson, author of In a Sunburned Country

“Part Cook biography, part travelogue, and very much a stroke of genius.” —The Philadelphia Inquirer

“Hilarious, brainy, and balanced. . . .A trip with Horwitz is as good as it gets.” —The Charlotte Observer

“Horwitz succeeds brilliantly in turning the English from stiff icons to flesh-and-blood human beings. The book's constant humor, honesty and judgment recall his own Confederates in the Attic and Bill Bryson's A Walk in the Woods.. . . This book will keep you enthralled.” —The Seattle Times