Had Gadya: A Passover Song (Paperback) 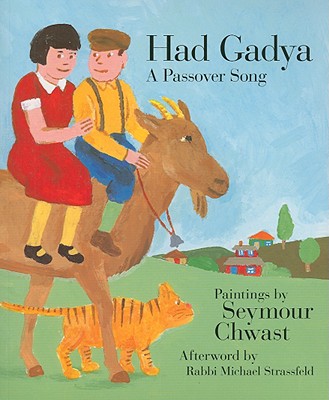 Had Gadya: A Passover Song (Paperback)

Designed to provoke the curiosity of children, Had Gadya is the traditional cumulative song that ends the Passover Seder. Internationally acclaimed artist Seymour Chwast provides a fresh look at Had Gadya with a bright, spring palette in a charming folk-art style. Rabbi Michael Strassfeld provides a thought-provoking afterword on the symbolism of this beloved song.

Seymour Chwast is a distinguished graphic artist whose work has influenced two generations of designers and illustrators. He is a cofounder of the Push Pin Studios and a member of the Art Directors Hall of Fame. His work appears in major museums throughout the world, including the Metropolitan Museum of Art, and appears regularly in Time, The New York Times, and Newsweek. He based his depiction of the angel on Rabbinic sources, and created the setting of "Had Gadya "from his appreciation of the paintings of Marc Chagall and his interest in folk art.

Rabbi Michael Strassfeld is the rabbi of the Society for the Advancement of Judaism. He is coauthor of the three volumes of "The Jewish Catalog," as well as "A Night of Questions: A Passover Haggadah," ""and author of "The Jewish Holidays: A Guide & Commentary."

“The simple yet thorough explanations and interpretations will provide a boon for parents seeking to help their children understand the relevance of the simple folk song to the greater mysteries of this important Jewish holy day.”—The Bulletin of the Center for Children’s Books
“Exuberant . . . bound to add to the pleasure of the Seder even as it provokes some lively arguments.”—Booklist
“Chwast, a noted graphic artist, puts the traditional song in a fresh new setting.”—Washington Post Book World
“Delightful. Chwast’s paintings are at once whimsical and powerful.”—The Jewish Week
“As an artist whose immediately recognizable images are at once primitive and childlike, yet sophisticated and modern, who better than Seymour Chwast to capture the Seder’s [traditional last song].”—The Forward