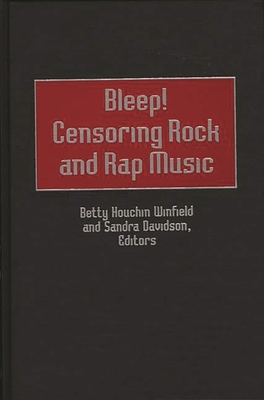 Examining the various boundaries of American artistic tolerance, chapters address the societal and legal responses to rock and rap music. Artistic expression has historically clashed with mainstream views, resulting in apprehension acted upon internally and externally, especially when expression is aimed toward children or young adults. This work studies the mass media content and programming in network television, Rolling Stone magazine, and the New York Times reviews and spot news concerning rock and rap music. The National Endowment for the Arts, the FCC, and the music industry's internal responses to parents and adults are discussed as well. Inhibitions and censoring, it is argued, stem from adult concerns for a healthy functioning society and from anxiety about the impact of sexual explicitness and uncontrolled behavioral expression on adolescents. This work attempts to explain why societal intolerance has a pattern of limiting the lyrics and sounds of rock and rap music.

Uniquely combining both societal and legal viewpoints on censorship of America's popular music culture, these essays address issues of concern to various scholars including those studying mass media, censorship, and American popular culture. Legal appendices are included as useful references, such as the National Endowments for the Arts Obscenity and Rejections Sections.