Cheerful Money: Me, My Family, and the Last Days of Wasp Splendor (Paperback) 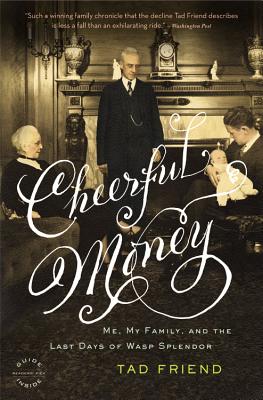 Cheerful Money: Me, My Family, and the Last Days of Wasp Splendor (Paperback)


Not On Our Shelves—Ships in 1-5 Days
From longtime New Yorker writer and author of In the Early Times, Tad Friend's "side-splittingly funny" Cheerful Money is both a gorgeously written family memoir and a sharp cultural study of the decline of the American WASP (Mary Karr).

Tad Friend's family is nothing if not illustrious: his father was president of College, and at Smith his mother came in second in a poetry contest judged by W.H. Auden -- to Sylvia Plath. For centuries, Wasps like his ancestors dominated American life. But then, in the '60s, their fortunes began to fall.

As a young man, Tad noticed that his family tree, for all its glories, was full of alcoholics, depressives, and reckless eccentrics. Yet his identity had already been shaped by the family's age-old traditions and expectations.

Part memoir, part family history, and part cultural study of the long swoon of the American Wasp, Cheerful Money is a captivating examination of a cultural crack-up and a man trying to escape its wreckage.
Tad Friend is a staff writer at the New Yorker, where he writes the magazine's "Letter from California." Prior to that, he wrote regularly for Outside, New York, and Esquire, and wrote travel stories from all seven continents. He plays golf and squash and watches a lot of television. He lives in Brooklyn with his wife, Amanda Hesser, and their children, Walker and Addie.
"Cheerful Money is side-splittingly funny and touching, without being the least predictable. It has the verve of Nick and Nora Charles with their silver martini shakers, and some insights mournful as Kafka's. This will become a classic."—Mary Karr, author of Lit and The Liars' Club

"In Tad Friend's stunning memoir about the lost world of the Wasp elite, the Hamptons' Georgica Pond comes to seem as Edenic as Thoreau's Walden. Friend animates a deeply private, aristocratic way of life with detailed, moving intimacy." —Susan Cheever

"Cheerful Money, by a self-stinging Wasp, is sharp as well as blunt about this problematic caste, but also rather proud of its salty aspects.  An insightful, highly humorous memoir, exceptionally well-written."—Peter Matthiessen, author of Shadow Country

"[A] splendid book....  Tad Friend does fall far enough from the tree to give us a delightfully rendered account of not only his self-discovery but an examination of "The Last Days of Wasp Splendor." It is gorgeously written....  Oh, reader, you are in for a treat."—San Francisco Chronicle

"Friend's talents are well suited to his material....  The tone he strikes is elegaic, even tender (at times) as he chronicles the futile pursuit of gracious living, now sinking into the "ruinous romance of loss.""—The Christian Science Monitor

"Cheerful Money: Me, My Family, and the Last Days of Wasp Splendor is taxonomy-as-memoir, an absolutely brilliant gift to the reader, wherein Friend essentially holds open the door to the exclusive club."—The Oregonian

"Friend's memoir, called "Cheerful Money," is a droll, psychologically astute and sometimes nostalgic look backward at the WASP world that was....   Recognizing that it's his inherited duty to entertain and amuse his audience, even as he's occasionally serving up grisly confessions and nut-hard kernels of emotional truth."—Maureen Corrigan, NPR

"American Wasps are now as rare as black truffles, and rarely has their story been told so candidly or entertainingly as it is in Tad Friend's wonderful new memoir, Cheerful Money....  Friend's book is such a winning family chronicle that the decline he describes is less a fall than an exhilarating ride, less sad than heartwarmingly comic."—Washington Post