The Lion & the Mouse (Hardcover) 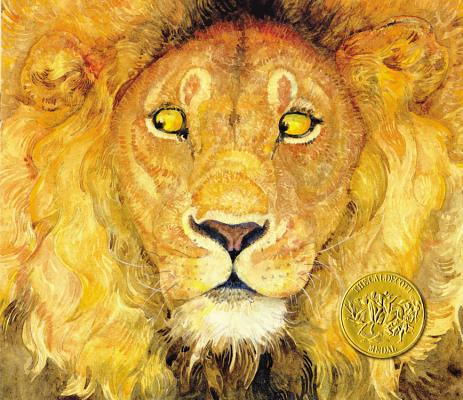 The Lion & the Mouse (Hardcover)


On Our Shelves Now at:
The Caldecott Award-winning and New York Times bestselling fable of compassion and kindness retold by acclaimed artist Jerry Pinkney.

In award-winning artist Jerry Pinkney's wordless adaptation of one of Aesop's most beloved fables, an unlikely pair learn that no act of kindness is ever wasted. After a ferocious lion spares a cowering mouse that he'd planned to eat, the mouse later comes to his rescue, freeing him from a poacher's trap. With vivid depictions of the landscape of the African Serengeti and expressively-drawn characters, Pinkney makes this a truly special retelling, and his stunning pictures speak volumes.

Don’t miss these other classic retellings by Pinkney:
The Little Mermaid
The Grasshopper and the Ants
The Tortoise and the Hare
The Three Billy Goats Gruff
Little Red Riding Hood
Twinkle, Twinkle, Little Star
Jerry Pinkney is one of the most heralded children's book illustrators of all time. He has the rare distinction of being the recipient of five Caldecott Honors and the winner of the 2010 Caldecott medal for The Lion and the Mouse. He has published numerous reimagined classic tales, including The Little Mermaid, The Tortoise & the Hare, The Grasshopper & the Ants, The Three Billy Goats Gruff, Little Red Riding Hood, and Twinkle, Twinkle, Little Star. He has won the Coretta Scott King Award five times, the Coretta Scott King Honor four times, and has been nominated for the prestigious Hans Christian Anderson Award. He was also the first children's book illustrator elected to the American Academy of Arts and Sciences. He lives with his wife, author Gloria Jean Pinkney, in Croton-on-Hudson, New York. The artist invites you to visit his website at jerrypinkneystudio.com.
Praise for The Lion and the Mouse:2010 Caldecott Medal WinnerScholastic Parent & Child Magazine 100 Greatest Books for KidsScholastic Parent & Child Magazine Most Beautifully Illustrated

* "Pinkney enriches this classic tale of friendship with another universal theme - family - affectingly illustrated in several scenes as well as in the back endpapers... African species grace splendid panoramas that balance the many finely detailed, closeup images of the protagonists. Pinkney has no need for words; his art speaks eloquently for itself."—Publishers Weekly, starred review

* "A nearly wordless exploration of Aesop's fable of symbiotic mercy that is nothing short of masterful... Unimpeachable."—Kirkus Reviews, starred review

* "Pinkney's luminous art, rendered in watercolor and colored pencil, suggests a natural harmony... The ambiguity that results from the lack of words in this version allows for a slower, subtle, and ultimately more satisfying read. Moments of humor and affection complement the drama. A classic tale from a consummate artist."—School Library Journal, starred review

* "By retelling Aesop's fable entirely in his signature pencil and watercolor art, Pinkney encourages closer exploration of the pleasing detail with which he amplifies it... It will be a challenge for libraries to make every gorgeous surface available, but it's a challenge worth taking on."—The Horn Book, starred review

"Here, Pinkney is audacious, courageous, or simply imaginative enough to retell the classic Aesop fable without text... As a master of the media, [he] handles pencil and transparent watercolors with added colored pencils to create naturalistic characters while avoiding the strictures of photorealism. This is a stunning tour de force."—Children's Literature

"This version of the familiar Aesop's fable--lushly illustrated and set in Africa's Serengeti region--offers a unique, and memorable, concluding twist."—The Washington Post

"A child will get lost in the illustrations and grow old with this beauty."—Verily Magazine

"A delightful, old-fashioned version of the tale. With lively detail...the pictures reflect the danger and coziness, and are just right for their preschool audience."—Booklist

"An attractive take on the familiar folktale, particularly appropriate for groups."—The Horn Book