Nubs: The True Story of a Mutt, a Marine & a Miracle (Hardcover) 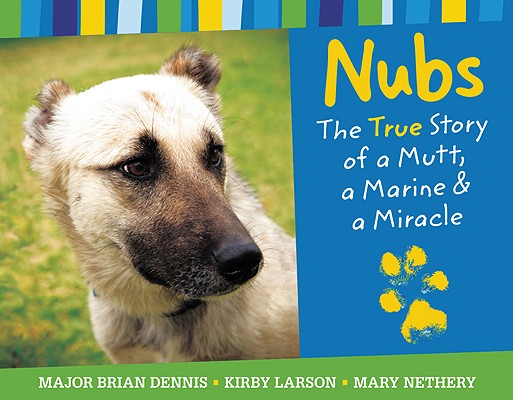 Nubs: The True Story of a Mutt, a Marine & a Miracle (Hardcover)


Not On Our Shelves—Ships in 1-5 Days
Discover the true story of a Marine and the fiercely loyal dog he befriends during the Iraq War. Over 100,000 copies sold!  Nubs, an Iraqi dog of war, never had a home or a person of his own. He was the leader of a pack of wild dogs living off the land and barely surviving. But Nubs's life changed when he met Marine Major Brian Dennis. The two formed a fast friendship, made stronger by Dennis's willingness to share his meals, offer a warm place to sleep, and give Nubs the kind of care and attention he had never received before. Nubs became part of Dennis's human "pack" until duty required the Marines to relocate a full 70 miles away—without him. Nubs had no way of knowing that Marines were not allowed to have pets.

So began an incredible journey that would take Nubs through a freezing desert, filled with danger to find his friend and would lead Dennis on a mission that would touch the hearts of people all over the world.

Nubs and Dennis will remind readers that friendship has the power to cross deserts, continents, and even species.
Brian Dennis is a major in the Marines. He and Nubs live in San Diego.
Kirby Larson is the acclaimed author of the 2007 Newbery Honor book, Hattie Big Sky. Her most recent title is Two Bobbies: A True Story of Hurricane Katrina, Friendship and Survival, co-written with Mary Nethery. Kirby lives in Kenmore, Washington.
Mary Nethery is the author of many picture books, including Hannah and Jack, Mary Veronica's Egg, and Cat Goes to Market. Mary lives in Eureka, California.