Brothers to the Death (The Saga of Larten Crepsley #4) (Paperback) 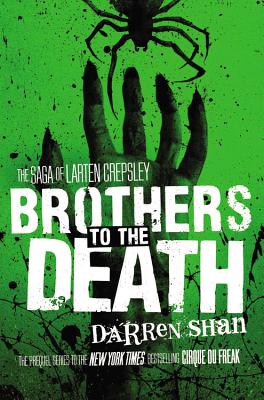 Brothers to the Death (The Saga of Larten Crepsley #4) (Paperback)

This is book number 4 in the The Saga of Larten Crepsley series.

After years of wandering, Larten has finally found his way back to his
vampire family and resumed the vigorous, brutal training to become a
General. But there are vampires determined to pull Larten into starting
a war that could have global implications and casualties. Vampires who
will stop at nothing. Vampires who would betray Larten in the most
cutting way.
Darren Shan is the bestselling author of the young adult series Cirque Du Freak, The Demonata, and the Saga of Larten Crepsley series, as well as the stand-alone book The Thin Executioner. His books have sold over 25 million copies worldwide. Shan divides his time between his homes in Ireland and London.
"The novel is fast paced and packed with thought-provoking discussions of war and peace, hate and tolerance, and resentment and forgiveness...Fans of the series will appreciate the conclusion of the master's story, while new fans will be able to jump into the book without any trouble. This is a good read for fantasy and adventure fans alike."—--VOYA

Praise for The Saga of Larten Crepsley:"Fans of Darren Shan will eat this book up and likely go on to reread the series, now that they know the backstory on how a killer was born."—--VOYA

"Cirque du Freak" aficionados will be intrigued by this glimpse into Crepsley's formative years..."—-- School and Library Journal