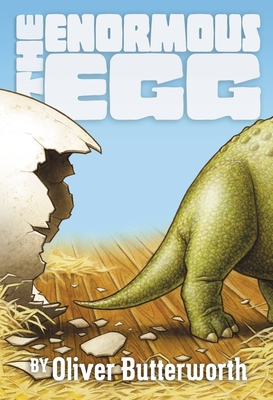 
In Stock—Click for Locations
Young Nate Twitchell is surprised when one of the hens on his family farm lays a giant egg. After a painstaking wait, Nate is even more surprised when it hatches and out pops a baby triceratops that he names Uncle Beazley! But when Nate decides to keep the dino and raise it on his own, he has no idea what he's getting himself into. As Uncle Beazley grows, Nate and his family realize they are not equipped to take care of a full-sized dinosaur, and so with the help of their scientist friend, Nate and Uncle Beazley set off for the NationalMuseum in Washington, D.C., on the hunt for the perfect home for a modern-day dinosaur---then the real trouble begins!

The Enormous Egg was originally published in 1956 and has been a classic in children's literature ever since. This brand new edition features amazing new illustrations from Eisner-award winning graphic novelist Mark Crilley (creator of Akiko and Miki Falls).
Oliver Butterworth was born in Hartford, Connecticut, in 1918. Before his death in 1990, he taught English at the Hartford College of Women for 43 years.
"Quite a yarn. Recommended."—School Library Journal (double-starred review)