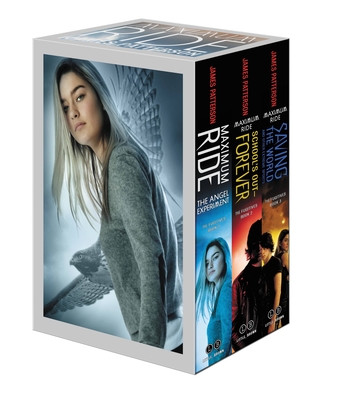 
Not On Our Shelves—Ships in 1-5 Days
Discover the #1 New York Times bestselling series that inspired the movie and manga with the ultimate sleek box set.

Join Max and her flock on three Maximum Ride adventures: The Angel Experiment (#1), School's Out-Forever (#2), and Saving the World and Other Extreme Sports (#3). Being a kid with wings sounds like a dream come true, but when you're facing half-human, half-wolf "Erasers" and a sinister science experiment, life can be complicated. From the deadly heat of Death Valley to the treetops of Central Park in Manhattan, this is one set of adventures you will never forget.

This box set also includes a bonus teaser and an exclusive excerpt from Angel (Maximum Ride #7) and a Witch & Wizard teaser!
James Patterson has had more New York Times bestsellers than any other writer, ever, according to Guinness World Records. Since his first novel won the Edgar Award in 1977 James Patterson's books have sold more than 300 million copies. He is the author of the Alex Cross novels, the most popular detective series of the past twenty-five years, including Kiss the Girls and Along Came a Spider. He writes full-time and lives in Florida with his family.