I Even Funnier: A Middle School Story (I Funny #2) (Hardcover) 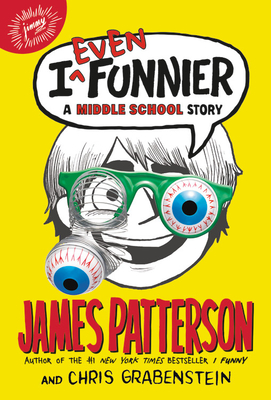 I Even Funnier: A Middle School Story (I Funny #2) (Hardcover)

This is book number 2 in the I Funny series.

In James Patterson's follow-up to I Funny, middle schooler Jamie Grimm is ready for the national comedy semi-finals. . . but when his family and friends need his help, will he have to put his dreams on hold?
In this follow up to the #1 New York Times bestseller I Funny, middle schooler Jamie Grimm has big dreams of being the best stand-up comic in the world-and he won't let the fact that he's wheelchair-bound stand in his way. After winning the New York state finals in the Planet's Funniest Kid Comic Contest, Jamie's off to Boston to compete in the national semi-finals.
But when one of his best buddies runs into trouble at school and a sudden family health scare rears its head, Jamie has to put his comedic ambitions on hold and stand by the people he cares about. Can Jamie pass up the big competition for the sake of his friends and family?
James Patterson has had more New York Times bestsellers than any other writer, ever, according to Guinness World Records. Since his first novel won the Edgar Award in 1977 James Patterson's books have sold more than 300 million copies. He is the author of the Alex Cross novels, the most popular detective series of the past twenty-five years, including Kiss the Girls and Along Came a Spider. He writes full-time and lives in Florida with his family.

"....Poignant.... Readers learn about [Jamie's] devastating loss and
recovery from a tragic event....The affecting ending, which reveals a
more vulnerable Jamie behind the guise of his humor, celebrates Jamie's
resilient spirit."—Kirkus Reviews

"The broad humor that runs throughout this heavily illustrated story...
masks personal pain, demonstrating resiliency in the face of tragedy."—Publishers Weekly

"Play[s] readers' heartstrings like a banjo.... A brimming bucket of bada-bing!"—Booklist