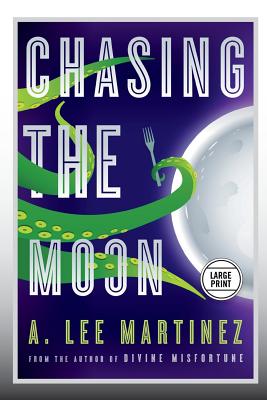 By A. Lee Martinez


Not On Our Shelves—Ships in 1-5 Days
Unspeakable horrors threaten the earth in this fantastic new comic fantasy from the author of "Divine Misfortune."
Diana's life was in a rut - she hated her job, she was perpetually single, and she needed a place to live. But then the perfect apartment came along. It seemed too good to be true - because it was.
The apartment was already inhabited - by monsters. Vom the Hungering was the first to greet Diana and to warn her that his sole purpose in life was to eat everything in his path. This poses a problem for Diana since she's in his path...and is forbidden from ever leaving the apartment.
It turns out though that there are older and more ancient monstrous entities afoot - ones who want to devour the moon and destroy the world as we know it. Can Diana, Vom, and the other horrors stop this from happening? Maybe if they can get Vom to stop eating everything...and everyone.
A. Lee Martinez was born in El Paso, Texas. At the age of eighteen, for no apparent reason, he started writing novels. Thirteen short years (and a little over a dozen manuscripts) later, his first novel, Gil's All Fright Diner, was published. His hobbies include juggling, games of all sorts, and astral projecting. Also, he likes to sing along with the radio when he's in the car by himself. For more information on the author, check out www.aleemartinez.com.