If You Find This (Paperback) 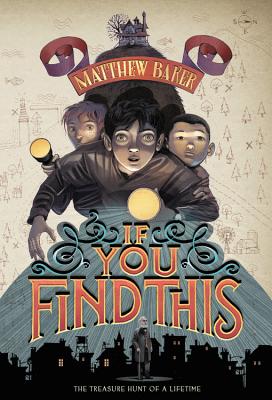 If You Find This (Paperback)


Not On Our Shelves—Ships in 1-5 Days
Mixing mystery and adventure in the tradition of Louis Sachar, Avi, and E.L. Konigsburg, If You Find This is the story of unlikely friendships, unexpected bravery and eleven-year-old Nicholas Funes's quest to prove his grandfather's treasure is real.

Nicholas is a math and music genius with no friends and a huge problem: His father has lost his job, and they'll have to sell their house, which holds the only memory Nicholas has of his younger brother. Just in time, Nicholas's senile grandfather arrives, filled with tales of priceless treasure he has hidden somewhere in town--but where?

Matthew Baker's stories have appeared in American Short Fiction, New England Review, The Kenyon Review, and Best of the Net, and been shortlisted in Best American Short Stories. He has held creative writing fellowships through the Fulbright Commission, the MacDowell Colony, and Vanderbilt University, among others. He was born and lives in Michigan. If You Find This is his first novel.
Praise for If You Find This:A Booklist Top Ten 2015 Debut Novel
An Edgar Award Nominee for Best Juvenile Mystery

"This unique book is both a ripping adventure and a piercing portrait of an extraordinary boy. You've never heard a tale told like this... For that, and many other reasons, it demands to be read and discussed."—Adam Gidwitz, New York Times bestselling author of A Tale Dark and Grimm

* "Reminiscent of Louis Sachar's Holes, this is a rich, captivating tale about family and redemption that redefines the meaning of treasure."—Booklist

"Smugglers caves, graveyards, ghost houses, seances, and...maps come together to make an intriguing mystery for the group to solve as the characters wrestle with their past selves in hopes of a better future. The story is enhanced with musical and mathematical notations (terms like "forte" and "piano" appear as subscript throughout, modifying actions and dialogue), giving readers a glimpse into Nicholas's impressive brain and adding an unusual layer of interest and beauty to debut author Baker's storytelling."—Publishers Weekly