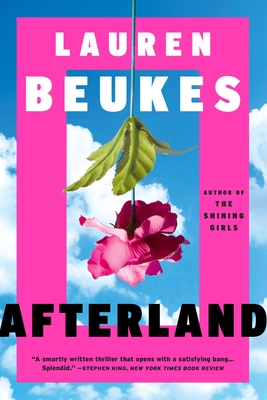 
On Our Shelves Now at:
Children of Men meets The Handmaid's Tale in this "smartly written" and "splendid" thriller about how far a mother will go to protect her son from a hostile world transformed by the absence of men (Stephen King).

Most of the men are dead. Three years after the pandemic known as The Manfall, governments still hold and life continues—but a world run by women isn't always a better place.

Twelve-year-old Miles is one of the last boys alive, and his mother, Cole, will protect him at all costs. On the run after a horrific act of violence-and pursued by Cole's own ruthless sister, Billie—all Cole wants is to raise her kid somewhere he won't be preyed on as a reproductive resource or a sex object or a stand-in son. Someplace like home.

To get there, Cole and Miles must journey across a changed America in disguise as mother and daughter. From a military base in Seattle to a luxury bunker, from an anarchist commune in Salt Lake City to a roaming cult that's all too ready to see Miles as the answer to their prayers, the two race to stay ahead at every step . . . even as Billie and her sinister crew draw closer.

A sharply feminist, high-stakes thriller from award-winning author Lauren Beukes, Afterland brilliantly blends psychological suspense, American noir, and science fiction into an adventure all its own—and perfect for our times.

Lauren Beukes writes novels, comics and screeplays. She's the author of the critically acclaimed international bestseller Broken Monsters, as well as The Shining Girls, about a time traveling serial killer, Zoo City, a phantasmagorical Joburg noir and winner of the 2011 Arthur C Clarke Award, and the neo-political thriller Moxyland. She worked as a journalist and as show runner on one of the South Africa's biggest animated TV shows, directed an award-winning documentary and wrote the New York Times bestselling graphic novel, Fairest: The Hidden Kingdom. She lives in Cape Town, South Africa.

“A smartly written thriller that opens with a satisfying bang . . . Beukes is all about turning assumptions and expectations upside down. . . . Think of a world where Donald Trump and Ted Cruz have gone to their reward, but Ruth Bader Ginsburg keeps on trucking. That doesn’t sound so bad, does it?”
—Stephen King, New York Times Book Review

"Bowstring-taut, visceral, and incredibly timely: Beukes's plague-tale is a parable about the glory and terror of Americanism in times of calamity."—Cory Doctorow, author of Walkaway and Little Brother

“Beukes is such an idiosyncratic writer — one who deftly mashes up suspense, sci-fi, horror, time travel, and, yes, dystopian fiction — that she’s hard to ignore. . . . Beukes imbues what could have simply been a sensational thriller with psychological depth and sharp detail. For those whose taste for dystopian suspense is undiminished, Beukes’s tale of a mother and son making their way across a post-pandemic-ravaged landscape is prescient and taut.”—Maureen Corrigan, Washington Post

“A post-apocalyptic thrill-ride."—O, The Oprah Magazine

"A post-pandemic gender-spun thriller that's sharp-as-a-pin and manages both urgency and relevancy in equal measure. Gripping prose from the first page that made me want to be a better writer. Beukes always moves to the top of my must-read list."—Chuck Wendig, author of national bestseller Wanderers

“If you’re ready for a wild ride across an America forever changed by a devastating pandemic, climb aboard . . . It’s a lot — but it’s also a lot of fun.”—Boston Globe

"A harrowing tale that ably explores grief, motherhood, and gender roles . . . Beukes is a gifted storyteller who makes it thrillingly easy for readers to fall under her spell as she weaves a hypnotic vision of a fractured world without men. A propulsive and all-too-timely near-future thriller."—Kirkus Reviews

"Lauren Beukes is a writer with a startling imagination, and a masterful ability to rewrite the rules of whatever genre she turns to; and now, right on time, she has turned to dystopian plague."—Ben Winters, author of Underground Airlines and Golden State

"Eerily
relevant . . . Beukes' tender, insightful treatment of the relationship between
mother and son is significant, and the interplay between feuding sisters is
fascinating, as well."—Booklist

"Deeply compelling . . . I haven't been able to stop thinking about Afterland. Beukes brings a deep tenderness to the tangle of humanity that comes with widespread grief and clumsy attempts at coping with the weight of loss. This is really something special."—Sarah Gailey, author of Upright Women Wanted and Magic For Liars

"I'm an enormous fan of Lauren Beukes. She's an endlessly interesting writer, able to bend and weld genre to ask provocative questions and bring light to the shadows of the human condition. Afterland is a thoroughly gripping, imaginative thriller about a mother protecting her son, a rare survivor of a devastating plague that wiped out most of Earth's male population. In this new world, women exercise power for and against each other--the power of love, the power of violence, unleashed in the absence of men."
—Steph Cha, author of Your House Will Pay

“Beukes has stitched together the surprise matriarchy of The Power, the millenarian despair of Children of Men and the deeply intelligent questions of Ursula Le Guin’s The Left Hand of Darkness. . . Afterland is that rare creature, a ripping tale that neither shies away from big questions nor interesting answers.” ?—New Scientist

"Beukes nails the speed of the unraveling, and the strangeness of living in a suddenly altered world. I hope none of the rest of it comes true."—Emily Temple, Lit Hub

“Set in a near-future that eerily resonates with our present pandemic, Afterland is not only an intriguing thought experiment, but a riveting read.”—Shondaland

"Intriguing and all too timely . . . Fans of high-concept feminist SF thrillers will be enthralled. . . . A worthy addition to the pandemic fiction subgenre."—Publishers Weekly

“With remarkable prescience, Afterland takes on an 'unprecedented global pandemic' with chilling results--and surprising comic relief threaded throughout. . . . This pandemic distraction is ready for worldly audiences, offering titillating thrills, schadenfreude and, most surprisingly (and necessarily), even a few take-me-away snorts and shrieks.” —ShelfAwareness

"While the prose in Afterland is playful (think puns and pop culture references), Beukes utilizes the characters’ milieu to explore climate change, police brutality, and violations of bodily integrity."—Electric Lit