Yogi: A Life Behind the Mask (Paperback) 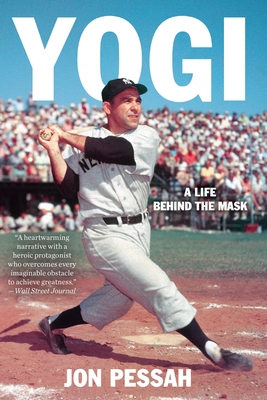 Yogi: A Life Behind the Mask (Paperback)


On Our Shelves Now at:
Discover the definitive biography of Yogi Berra, the New York Yankees icon, winner of 10 World Series championships, and the most-quoted player in baseball history.

That's what his immigrant father told him. That's what Branch Rickey told him, too—right to Berra's face, in fact. Even the lowly St. Louis Browns of his youth said he'd never make it in the big leagues.

Drawing on more than one hundred interviews and four years of reporting, Jon Pessah delivers a transformational portrait of how Berra handled his hard-earned success—on and off the playing field—as well as his failures; how the man who insisted "I really didn't say everything I said!" nonetheless shaped decades of America's culture; and how Berra's humility and grace redefined what it truly means to be a star.

Overshadowed on the field by Joe DiMaggio early in his career and later by a youthful Mickey Mantle, Berra emerges as not only the best loved Yankee but one of the most appealingly simple, innately complex, and universally admired men in all of America.

Jon Pessah is the New York Times bestselling author of The Game, a critically-acclaimed examination of the power brokers who built the major league baseball into a multi-billion dollar business. A founding editor of ESPN the Magazine, where he ran the investigative team, Pessah has also managed the sports departments for Newsday and the Hartford Courant.
"If you're a lifetime baseball fan, you'd
rather be watching an early-season major-league game now instead of recycled
classics during this plague year. But Mr. Pessah's book is as good a proxy for baseball
pleasure as you're going to find. It's a relaxed, sprawling affair-like those
Yankee Stadium Sunday double-headers...This is a heart-warming narrative with a
heroic protagonist who overcomes every imaginable obstacle to achieve
greatness."—Edward Kosner, Wall Street Journal

"Now, when the baseball season would normally be in its early days, Jon Pessah's biography Yogi: A Life Behind the Mask arrives to help fill the void. It's a book that covers the funny quotes and the exceptional career, but also the complicated and sensitive person often obscured by the image."—John Williams, New York Times

"Pessah proves to be the only writer of baseball books who you would stand on line for hours to get copies of his work, on the day the publisher stocks store shelves."—Observer-Dispatch

"Pessah provides a gripping account of the Yankees' postwar dynasty, but he also generates excitement for Berra's stint with the Mets, most notably the 1973 Amazin's. Where he excels is in probing the relationships in Berra's baseball career... The book also expertly situates Berra's life in historical context. Yogi: A Life Behind the Mask lives up to a Herculean task, offering a fresh look at a player ubiquitous in American culture. It will fit nicely on any Yankees fan's bookshelf."—Pinstripe Alley/SB Nation

"While a number of
books have been written about Yogi Berra, none are as comprehensive
as this in-depth account by sportswriter Pessah ...A thorough, engaging read for
Berra fans and Yankee admirers."—Library Journal

"A vigorous biography
of the New York Yankees legend... Yogi emerges as a man who was more thoughtful
than many give him credit for...A welcome life of the Yankees icon and worthwhile
reading for any baseball buff."—Kirkus

"Yogi
Berra is a poster boy for the greatest generation; both a man of great
character and a ... great character! His journey from "The Hill" to
Normandy to Yankee hero to American icon is inspiring. Thank you Jon
Pessah for making this book necessary!"—Marty Appel, Yankee historian and author of Pinstripe Empire,Munson and Casey Stengel

"Here's a contender for baseball book of the year. Pessah's Yogi is as warm, winning and entertaining as its subject-certain to be the definitive biography of an American legend."—Jonathan Eig, authorof Luckiest Man, Opening Day, and Ali: A Life

"Yogi Berra is the greatest winner
of all time and one of baseball's most lovable, fascinating, and iconic
players. Jon Pessah brings Yogi to life, from his childhood, to his brilliance
as a Yankee, to his importance as a cultural icon. I thought I understood
Yogi's life and career, but I learned something new on virtually every page."—TimKurkjian, senior baseball writer/analyst, ESPN

"Jon Pessah's meticulously sourced Yogi: A Life Behind the Mask immediately becomes essential for anyone interested in the life of a true American icon. The book is a serious and thoughtful treatment of a life that was a good deal more complex than most people realize. Throughout, it's Yogi's warmth, love of his family and loyalty to them and his friends that drive this narrative. Yogi Berra was a beautiful person with a big heart, and this biography more than does him justice. Simply put-a great read for any baseball fan."—Joe Garagiola Jr., Special Advisor to the President/CEO Arizona Diamondbacks

"Jon Pessah is not just an author who recounts history. He is a talented storyteller, as his critically acclaimed The Game illustrated. Now he has used his passion and prose to give us Yogi, a rich and poignant portrait of one of America's most beloved sports icons."—Clare Smith, JG Spink Award winner (2017) and ESPN Coordinating Editor/Baseball

"If Yogi Berra wasn't a true story, nobody could make him up. Or maybe a brilliant storyteller like Jon Pessah could! But thanks to Yogi, Pessah doesn't have to."—-Rob Neyer, author of Power Ball: Anatomy of a Modern Baseball Game

Yogi is a masterwork...Jon Pessah expertly reveals the powerful influence of one of baseball's, and perhaps all of America's, most golden-hearted and well-beloved characters."—Tyler Kepner, author of K: A History of Baseball in Ten Pitches