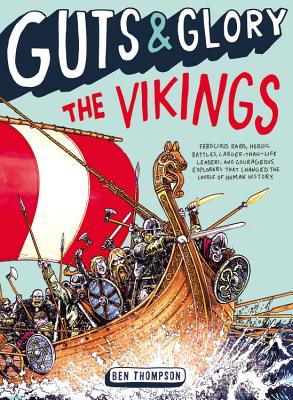 This is book number 2 in the Guts & Glory series.

History comes alive for kids like no textbook can in this epic account of the time of the Vikings that's perfect for history buffs and reluctant readers! Contains awesome illustrations!

From battle-axe-wielding tribes plundering the greatest cities of Europe to powerful kings and queens ruling their dominions with iron fists, the Vikings were some of the most feared and fearless figures in European history. Find the bravest heroes, the most menacing villains, and unbelievably awesome facts and myths inside this action-packed overview that will amaze kids with tales of a people so incredible...it's hard to believe they were real.

History buff and popular blogger Ben Thompson's lively storytelling style brings the Vikings back to life in this second book in the exhilarating Guts & Glory series!
Ben Thompson is the author of Guts & Glory: The American Civil War, Guts & Glory: The Vikings, Guts & Glory: World War II, and Guts & Glory: The American Revolution. For more than ten years, he has been producing humorous, history-related material, including articles for publications such as Military Times and for organizations like the American Mustache Institute. Ben is named after Benjamin Franklin, but this hasn't bestowed him with any supernatural knowledge of the American Revolution. He had to research it the old-fashioned way. He invites you to visit his website at gutsandgloryhistory.com.
Praise for Guts & Glory: The American Civil War:"The book's greatest strength is its colloquial storytelling.... designed to attract reluctant readers...makes the history accessible. Thompson's passion for his subject is infectious.... An easy, breezy series opener that should help create a few new history buffs."—Kirkus Reviews

"Action-packed.... Thompson adopts an urgent and sometimes humorous tone that conveys infectious enthusiasm.... A rousing introduction to this defining conflict that makes the history appealing and relatable."—Publishers Weekly

"An entertaining overview.... What brings these events to life, particularly for reluctant readers, is Thompson's spirited, conversational narration.... Should keep students engaged."—Booklist

Praise for Guts & Glory: The American Revolution:
"Thompson's books are a meaty delight. Digestible chapters are packed with info, one-page bios hit the highlights of their subject's lives, and sidebars full of interesting tidbits are all part of the appeal of the nonfiction Guts & Glory series.... A very satisfying read that even adults will find useful."—Booklist