No Better Friend: Young Readers Edition: A Man, a Dog, and Their Incredible True Story of Friendship and Survival in World War II (Paperback) 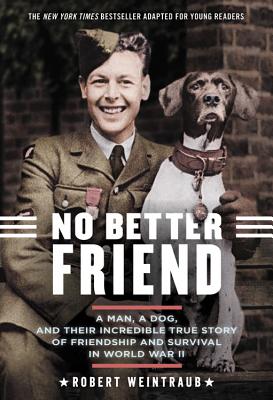 No Better Friend: Young Readers Edition: A Man, a Dog, and Their Incredible True Story of Friendship and Survival in World War II (Paperback)


Not On Our Shelves—Ships in 1-5 Days
Discover an extraordinary tale of friendship and survival between a man and a dog in World War II in this young readers' adaptation of the New York Times bestseller No Better Friend.

No Better Friend tells the incredible true story of Frank Williams, a radarman in Britain's Royal Air Force, and Judy, a purebred pointer, who met as prisoners of war during World War II. Judy, who became the war's only official canine POW, was a fiercely loyal dog who sensed danger--warning her fellow prisoners of imminent attacks and protecting them from brutal beatings. Frank and Judy's friendship, an unbreakable bond forged in the worst circumstances, is one of the great recently unearthed stories of World War II.

As they discover Frank and Judy's story in this specially adapted text, young readers will also learn about key World War II moments through informative and engaging sidebars, maps, photographs, and a timeline.
Robert Weintraub is a frequent contributor to the New York Times and Slate and the author of the acclaimed books The House That Ruth Built, The Victory Season, and No Better Friend.
Praise for No Better Friend: Young Readers Edition:"A riveting and highly moving dog story."—Kirkus Reviews

"An enormously readable account of animal and human companionship and survival; recommended for budding historians and fans of survival stories."
—School Library Journal

Praise for No Better Friend:
"No Better Friend personifies the relationship we all aspire to have with our dogs, and takes us on a harrowing journey to a place and time lost in the history books. A must read for every dog or animal lover."—Robin Hutton, author of Sgt. Reckless: America's War Horse

"Robert Weintraub captures the beauty and power of friendship and loyalty between man and animal in this captivating narrative. We'd all be lucky to have a dog like Judy by our sides in our darkest times."
—Cate Lineberry, author of The Secret Rescue: An Untold Story of American Nurses and Medics Behind Nazi Lines

"This is the best dog book since the uber best-selling Marley and Me."—Linda Wilson Fuoco, Pittsburgh Post-Gazette

"Weintraub... combines a gritty war story with a warm dog story -- readers who like both will think they have gone to heaven.... Where he truly excels, though, is in finding the human dramas, some painful and some inspiring, that figured in Judy's saga."—Kate Tuttle, Boston Globe

"The most inspiring true life account I've ever read of a human-animal bond."—Maureen Corrigan, NPR

"Exceptionally well researched and engaging... No Better Friend is an inspiring story, and one that both dog lovers and history buffs will embrace."—Deborah Hopkinson, BookPage