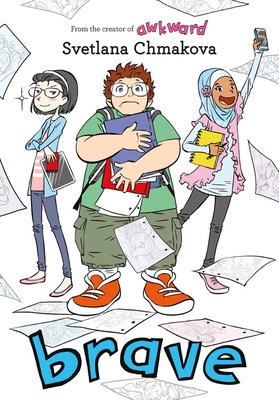 This is book number 2 in the Berrybrook Middle School series.

In his daydreams, Jensen is the biggest hero that ever was, saving the world and his friends on a daily basis. But his middle school reality is VERY different--math is hard, getting along with friends is hard...Even finding a partner for the class project is a huge problem when you always get picked last. And the pressure's on even more once the school newspaper's dynamic duo, Jenny and Akilah, draw Jensen into the whirlwind of school news, social-experiment projects, and behind-the-scenes club drama. Jensen has always played the middle school game one level at a time, but suddenly, someone's cranked up the difficulty setting. Will those daring daydreams of his finally work in his favor, or will he have to find real solutions to his real-life problems? The charming world of Berrybrook Middle School gets a little bigger in this highly anticipated follow-up to Svetlana Chmakova's award-winning Awkward with a story about a boy who learns his own way of being brave!
Svetlana Chmakova was born and raised in Russia until the age of 16, when her family emigrated to Canada. She quickly made a name for herself with works like Dramacon, Nightschool, the manga adaptation of James Patterson's Witch & Wizard, and the webcomic Chasing Rainbows. She graduated from Sheridan College with a three-year Classical Animation Diploma. Her latest work for middle grade readers, Awkward, has been a runaway critical success and was named one of YALSA's 2016 Top Ten Great Graphic Novels for Teens!