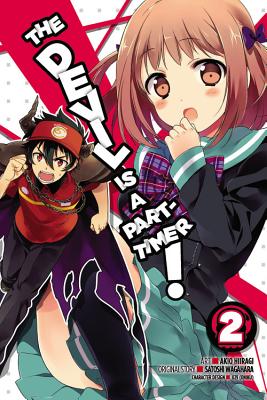 This is book number 2 in the The Devil Is a Part-Timer! Manga series.

Old Friends, new enemies! In the Sasazuka neighborhood of the Shibuya district of Tokyo, newly minted part-time burger-flipper and former Devil King Satan (now known as Sadao Maou) clashes with Lucifer, a fallen angel who used to serve him! But how will the onetime king deal with his rival now that his magic power's run dry? Now that the devil is one of us, he's going to have to get creative!
Akio Hiiragi is the artist behind the manga adaptation of the hilarious fantasy light novel series, The Devil is a Part-Timer!