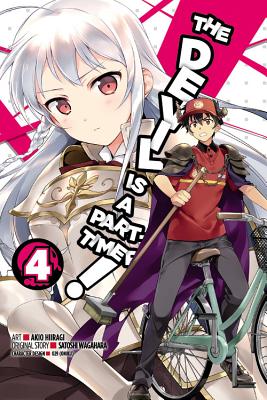 This is book number 4 in the The Devil Is a Part-Timer! Manga series.

This complication wears a kimono! The arrival of Suzuno Kamazuki has made everybody's life more complicated! After some misunderstandings regarding Suzuno's intentions toward Maou are cleared up, Emi asks for her help to...defeat the Devil King?! Meanwhile, a shadowy assailant continues to stalk Emi, but what does he--or she--want?
Akio Hiiragi is the artist behind the manga adaptation of the hilarious fantasy light novel series, The Devil is a Part-Timer!