Otis and Will Discover the Deep: The Record-Setting Dive of the Bathysphere (Hardcover) 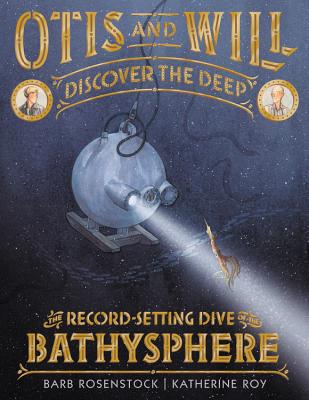 Otis and Will Discover the Deep: The Record-Setting Dive of the Bathysphere (Hardcover)


Not On Our Shelves—Ships in 1-5 Days
The suspenseful, little-known true story of two determined pioneers who made the first dive into the deep ocean.

On June 6, 1930, engineer Otis Barton and explorer Will Beebe dove into the ocean inside a hollow metal ball of their own invention called the Bathysphere.

They knew dozens of things might go wrong. A tiny leak could shoot pressurized water straight through the men like bullets! A single spark could cause their oxygen tanks to explode! No one had ever dived lower than a few hundred feet...and come back. But Otis and Will were determined to become the first people to see what the deep ocean looks like.

This suspenseful story from acclaimed author Barb Rosenstock with mesmerizing watercolors by award-winning artist Katherine Roy will put you right in the middle of the spine-tingling, record-setting journey down, down into the deep.
Barb Rosenstock is the author of Otis and Will Discover the Deep, the Caldecott Honor book The Noisy Paintbox, Thomas Jefferson Builds a Library, The Camping Trip that Changed America, and several others that have received numerous accolades and starred reviews. She lives in Illinois with her husband, sons, and two big poodles.
A Bank Street College Best Children's Book of 2018

* "[A] tribute to the power of curiosity, imagination, and ambition."—Publishers Weekly, starred review

* "This is a true adventure tale par excellence, tautly plotted, nail-bitingly told, and splendidly illuminated in the illustrations by Roy, from the detailed tinkering on deck, to the claustrophobic innards of the Bathysphere, to the exotic never-before-seen life forms that crossed the searchlight."—BCCB, starred review

* "The text brings in all the excitement and fear of the preparations and the dive itself. The illustrations...go perfectly with the text in conveying the anticipation of the dive, the darkness as they go deeper, and the fear as some unexpected things happen.... This would be an excellent book for read aloud."—School Library Connection, starred review

"A book worth discovering.... A remarkable first that young readers will want to explore."—Travis Jonker, 100 Scope Notes

"Meticulous research underpins everything with fascinating detail and sometimes terrifying drama, inextricably intertwined in this tribute to STEM, teamwork, and the 'last frontier on earth.'"
—The San Francisco Chronicle

"A repeated refrain of 'down, down, down' and ever-darkening backgrounds punctuated by moments of gasp-inducing mishaps ratchet up the tension, but when they finally make it to 800 feet below the ocean surface, it's all worth it for the view of glowing, alien creatures, which Roy powerfully depicts in a swirling, dusky double-gatefold spread."
—Booklist

"This exciting, suspenseful account of the Bathysphere's first deep-ocean dive vividly conveys the thrill of scientific discovery and celebrates the passion and drive of the diving tank's two creators."—Common Sense Media