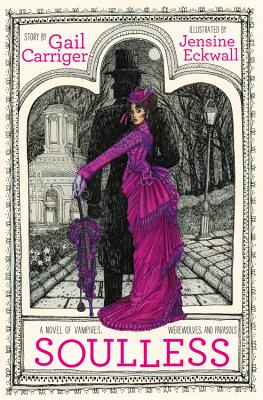 This is book number 1 in the The Parasol Protectorate series.

“Victorian London has never been more fun than in the company of Alexia Tarabotti. This refreshing blend of manners, parasols, werewolves, and vampires will appeal to fans of Sookie Stackhouse and Jane Austen -- and it will have everyone laughing out loud. Alexia is a character to treasure.”
— Katie Glasgow, Mitchell Books, Fort Wayne, IN

Buffy meets Jane Austen in the first book of this wickedly funny NYT bestselling series about a young woman whose brush with the supernatural leads to a deadly investigation of London's high society.

Alexia Tarabotti is laboring under a great many social tribulations. First, she has no soul. Second, she's a spinster whose father is both Italian and dead. Third, she was rudely attacked by a vampire, breaking all standards of social etiquette.

Where to go from there? From bad to worse apparently, for Alexia accidentally kills the vampire -- and then the appalling Lord Maccon (loud, messy, gorgeous, and werewolf) is sent by Queen Victoria to investigate.

With unexpected vampires appearing and expected vampires disappearing, everyone seems to believe Alexia responsible. Can she figure out what is actually happening to London's high society? Will her soulless ability to negate supernatural powers prove useful or just plain embarrassing? Finally, who is the real enemy, and do they have treacle tart?

Soulless is the first book of the Parasol Protectorate series: a comedy of manners set in Victorian London, full of werewolves, vampires, dirigibles, and tea-drinking.
New York Times bestselling author Gail Carriger writes to cope with being raised in obscurity by an expatriate Brit and an incurable curmudgeon. She escaped small town life and inadvertently acquired several degrees in Higher Learning. Ms. Carriger then traveled the historic cities of Europe, subsisting entirely on biscuits secreted in her handbag. She resides in the Colonies, surrounded by fantastic shoes, where she insists on tea imported from London.
"Carriger debuts brilliantly with a blend of Victorian romance, screwball comedy of manners and alternate history. . . . This intoxicatingly witty parody will appeal to a wide cross-section of romance, fantasy and steampunk fans."—Publishers Weekly (starred review)

"Soulless is a character-driven romp with great world building and delicious rapier wit that recalls Austen and P.G. Wodehouse."—i09.com

"Laugh out loud funny and refreshingly different, Soulless kept me turning pages well into the night. I enjoyed every minute of this wonderfully unexpected twist on paranormals...Wickedly funny."—Angie Fox, New York Times bestselling author of The Accidental Demon Slayer

"In this spectacular debut novel, Carriger has created a fascinating alternate Victorian London in which there are all sorts of supernatural creatures. Alexia is a smart and capable heroine armed with a parasol and an attitude. Moving at a healthy clip, this is a real page-turner."—RT Book Reviews

"I was enchanted from start to finish."—sfrevu.com