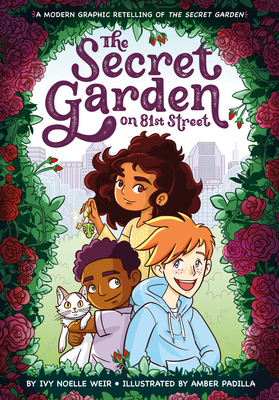 
Not On Our Shelves—Ships in 1-5 Days
The Secret Garden with a twist: in this follow-up to Meg, Jo, Beth, and Amy, this full-color graphic novel moves Mary Lennox to a New York City brownstone, where she and her very first group of friends restore an abandoned rooftop garden...and her uncle's heart.

Mary Lennox is a loner living in Silicon Valley. With her parents always working, video game and tech become her main source of entertainment and "friends." When her parents pass away in a tragic accident, she moves to New York City to live with her uncle who she barely knows, and to her surprise, keeps a gadget free home. Looking for comfort in this strange, new reality, Mary discovers an abandoned rooftop garden and an even bigger secret...her cousin who suffers from anxiety. With the help of her new friends, Colin and Dickon, Mary works to restore the garden to its former glory while also learning to grieve, build real friendships, and grow.

This title will be simultaneously available in paperback.
Ivy Noelle Weir is a writer of comics and prose. She is the co-creator of the Dwayne McDuffie Award-winning graphic novel Archival Quality (Oni Press), and her writing has appeared in anthologies such as Princeless: Girls Rock (Action Lab Entertainment) and Dead Beats (A Wave Blue World). She lives in the greater Boston area with her husband and their two tiny, weird dogs.

Amber Padilla is a cartoonist and illustrator, just starting out. Her previous professional history was in interactive and user experience design. She is currently enrolled in the MFA in Comics program at the esteemed art and design school, California College of the Arts. She received her undergraduate degree at Otis College of Art and Design. When she moved from LA to the Bay Area, she worked for a few short months for Slide Inc, which was later acquired by Google. For one year, in an autonomous unit within Google, she helped to design mobile social apps. She then continued to work at Google as a UX Designer for YouTube. She lent her design skills to products for the YouTube TV app, mobile app, YouTube ads and various desktop app projects. She is currently working on personal projects and a master's thesis in her studio space at the Firehouse Art Collective in the Gilman District of Berkeley. She resides in Oakland with her husband and two cats.