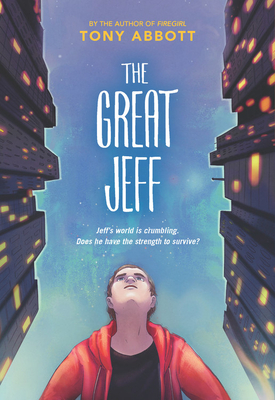 
In Stock—Click for Locations
Perfect for fans of Gary D. Schmidt comes the companion to the modern classic Firegirl from acclaimed writer Tony Abbott -- now in paperback!

Life hasn't been great for Jeff Hicks. After years at his beloved St. Catherine's, he's forced to spend eighth grade in the public middle school, which he hates. He's no longer speaking to his former best friend, Tom Bender, because of "that burned girl" Jessica Feeney. But worst of all, his family is changing, and it's not for the better.

When his mom comes home announcing that she's lost her job, Jeff begins to worry about things far beyond his years: How will they pay the rent? Will his absentee dad step up and save the day? Is his mom drinking too much? And ultimately, where will they live?

The Great Jeff is a powerful look at the life of a troubled boy who finds his life spiraling out of control.


Tony Abbott is the author of over a hundred books for young readers, including the bestselling series the Secrets of Droon and the Copernicus Legacy and the novel Firegirl. Tony has worked in libraries, bookstores, and a publishing company, and has taught creative writing. He has two grown daughters and lives in Connecticut with his wife and two dogs.
Praise for The Great Jeff:
A Curbed Best Kids Book of 2019
*"...an exquisitely moving yet completely age-appropriate dive into a kid's experience of impoverishment."—BCCB, starred review

"Jeff's search to understand himself and the harsh world around him is breathtaking."—Patricia Reilly Giff, author of Newbery honor winners Pictures of Hollis Woods and Lily's Crossing

"In a body of stellar work, The Great Jeff may be Abbott's finest."—Nora Raleigh Baskin, award winning author of Anything But Typical, Ruby on the Outside, and Nine, Ten: A September 11 Story

"...a hopeful coming-of-age story that portrays the challenges of poverty in a realistic and relatable way."—Booklist

"A powerful and realistic story of a boy coming of age with a family in crisis."—School Library Journal

"For fans of Firegirl, this follow-up is a must-read...this novel is a solid addition to any library."—School Library Connection

Praise for Firegirl:* "Tom's connection to Jessica changes his perspective on himself, his peers and friendship, and underscores the reward of reaching out to another.... This novel maybe be brief, but it leaves a big impact."—Publishers Weekly, starred review

* "This isn't the usual book about adjustment to differences; instead, Abbot brilliantly explores the kids' struggle to manage this intrusion of abnormality into their lives.... An understanding yet thought-provoking novel."
—The Bulletin of the Center for Children's Books, starred review

"A touching story of friendship that is easy to read yet hard to forget."
—School Library Journal

"In this poignant story, readers will recognize that even by doing small acts of kindness, people stand to gain more than they lose."
—Booklist