The Plot to Destroy Democracy: How Putin and His Spies Are Undermining America and Dismantling the West (Hardcover) 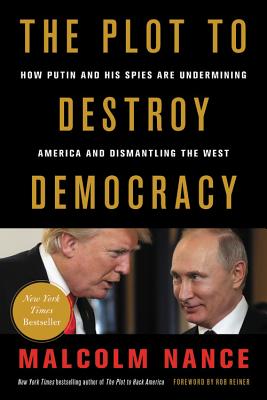 The Plot to Destroy Democracy: How Putin and His Spies Are Undermining America and Dismantling the West (Hardcover)


Not On Our Shelves—Ships in 1-5 Days
A provocative, comprehensive analysis of Vladimir Putin and Russia's master plan to destroy democracy in the age of Donald Trump.

In the greatest intelligence operation in the history of the world, Donald Trump was made President of the United States with the assistance of a foreign power. For the first time, The Plot to Destroy Democracy reveals the dramatic story of how blackmail, espionage, assassination, and psychological warfare were used by Vladimir Putin and his spy agencies to steal the 2016 U.S. election -- and attempted to bring about the fall of NATO, the European Union, and western democracy. It will show, through clear, fact-based arguments how Russia and its fifth column allies tried to flip the cornerstones of democracy in order to re-engineer the world political order that has kept most of the world free since 1945.

Career U.S. Intelligence officer Malcolm Nance will examine how Russia has used cyber warfare, political propaganda, and manipulation of our perception of reality -- and will do so again -- to weaponize American news, traditional media, social media, and the workings of the internet to attack and break apart democratic institutions from within, and what we can expect to come should we fail to stop their next attack.

Nance has utilized top secret Russian-sourced political and hybrid warfare strategy documents to demonstrate the master plan to undermine American institutions that has been in effect from the Cold War to the present day. Based on original research and countless interviews with espionage experts, Nance examines how Putin's recent hacking accomplished a crucial first step for destabilizing the West for Russia, and why Putin is just the man to do it.

Nance exposes how Russia has supported the campaigns of right-wing extremists throughout both the U.S. and Europe to leverage an axis of autocracy, and how Putin's agencies have worked since 2010 to bring fringe candidate Donald Trump into elections.

Revelatory, insightful, shocking, and easy to understand The Plot To Destroy Democracy puts a professional spy lens on Putin's plot and unravels it play-by-play. In the end, he provides a better understanding of why Putin's efforts are a serious threat to our national security and global alliances -- in much more than one election -- and a blistering and ultimately hopeful indictment of Putin's puppet, President Donald J. Trump.
Malcolm Nance is author of the New York Times bestseller The Plot to Hack America and The Plot to Destroy Democracy. He is a globally recognized Intelligence community member and a counter-terrorism analyst for NBC News and MSNBC.
"Nance traces the revival of Russian enmity to Putin's second term as president, when he turned his KGB training to good use in weakening his American opponents by exploiting their divisions-exactly what those active measures are supposed to do... A convincing...cry that treason is afoot."
—Kirkus Reviews

"The early chapters are easy going; the writing gets denser as Russians pop up faster than creatures in a Whack-a-Mole game, but even as this plot gets more intricate (and, yes, sometimes it does read like a political thriller), readers will be turning pages quickly, feeling both anxiety and betrayal. When, in the final pages, Nance lays out how he believes Donald Trump was recruited by Russian intelligence through the time-tried operation known as MICE (money, ideology, coercion, and ego), even supporters of the president will have something to think about. For those who are not supporters, Nance offers suggestions designed to counter the threat."
—Booklist

"It's an admittedly serious discussion about a serious topic: the survival of our country. With the level of detail, and fascinating insight, that only Malcolm can provide."—Espeak.com