The Precipice: Existential Risk and the Future of Humanity (Paperback) 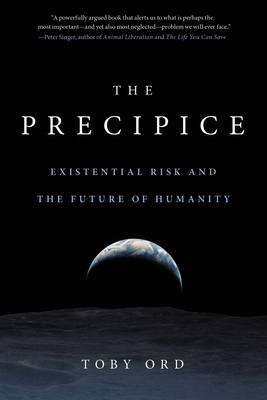 The Precipice: Existential Risk and the Future of Humanity (Paperback)


Not On Our Shelves—Ships in 1-5 Days
This urgent and eye-opening book makes the case that protecting humanity's future is the central challenge of our time.

If all goes well, human history is just beginning. Our species could survive for billions of years - enough time to end disease, poverty, and injustice, and to flourish in ways unimaginable today. But this vast future is at risk. With the advent of nuclear weapons, humanity entered a new age, where we face existential catastrophes - those from which we could never come back. Since then, these dangers have only multiplied, from climate change to engineered pathogens and artificial intelligence. If we do not act fast to reach a place of safety, it will soon be too late.

Drawing on over a decade of research, The Precipice explores the cutting-edge science behind the risks we face. It puts them in the context of the greater story of humanity: showing how ending these risks is among the most pressing moral issues of our time. And it points the way forward, to the actions and strategies that can safeguard humanity.

An Oxford philosopher committed to putting ideas into action, Toby Ord has advised the US National Intelligence Council, the UK Prime Minister's Office, and the World Bank on the biggest questions facing humanity. In The Precipice, he offers a startling reassessment of human history, the future we are failing to protect, and the steps we must take to ensure that our generation is not the last.

"A book that seems made for the present moment." —New Yorker
Toby Ord is a philosopher at Oxford University, working on the big picture questions facing humanity. His earlier work explored the ethics of global poverty, leading him to make a lifelong pledge to donate 10% of his income to the most effective charities helping improve the world. He created a society, Giving What We Can, for people to join this mission, and together its members have pledged over $1.5 billion. He then broadened these ideas by co-founding the Effective Altruism movement in which thousands of people are using reason and evidence to help the lives of others as much as possible. His current research is on risks that threaten human extinction or the permanent collapse of civilization, and on how to safeguard humanity through these dangers, which he considers to be among the most pressing and neglected issues we face. Toby has advised the World Health Organization, the World Bank, the World Economic Forum, the US National Intelligence Council, and the UK Prime Minister's Office.