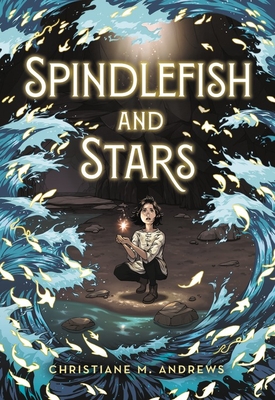 This spellbinding fantasy about a girl from the shadows and a boy from the sea is perfect for fans of The Girl Who Drank the Moon and The Book of Boy.

In which a story is spun.
And unspun.

Clothilde has lived her whole life in the shadows with her (sometimes) thieving and (always) ailing father. But when he fails to meet her one morning, sending her instead a mysterious ticket of half-paffage, Clo finds herself journeying across the sea to reunite with him. The ticket, however, leaves her on a sunless island inhabited only by creaking fishermen, a rumpled old woman, a piggish cat, and a moon-cheeked boy named Cary.

Clo is quickly locked away and made to spend her days in unnerving chores with the island's extraordinary fish, while the old woman sits nearby weaving an endless gray tapestry. Frustrated and aching with the loss of her father, Clo must unravel the mysteries of the island and all that's hidden in the vast tapestry's threads—secrets both exquisite and terrible. And she must decide how much of herself to give up in order to save those she thought she'd lost forever.

Inspired by Greek mythology, this spellbinding fantasy invites readers to seek connections, to forge their own paths, and to explore the power of storytelling in our interwoven histories.
Christiane Andrews grew up in rural New Hampshire, Vermont, and Maine, on the edges of mountains and woods and fields and sometimes even the sea. A writing and literature instructor, she lives with her husband and son and a small clutch of animals on an old New Hampshire hilltop farm. Spindlefish and Stars is her first novel. Visit Christiane online at cmandrews.com.
Best Middle Grade Books of 2020—Kirkus Reviews

* "An epic tale of abandonment, travel, secrets, family, and the meaning of art.... Exquisite in detail.... A tapestry, both humble and rich."
—Kirkus Reviews, starred review

* "A lyrical debut exploring the nature of destiny and sacrifice.... The narrative voice...makes this enchanting story feel like an all-new myth built from classic material."—Publishers Weekly, starred review

* "Readers familiar with Greek myth will take special pleasure in the slantwise view Andrews conjures.... The tapestry metaphor also offers a longer, measured view of the unavoidability of pain and the beauty of kindness as well as commentary on the persistence of powerful stories through art."
—BCCB, starred review

"Both mysterious and evocative.... A dreamy, immersive story that raises questions aboutthe power of art and the value of humansuffering."
—The Horn Book