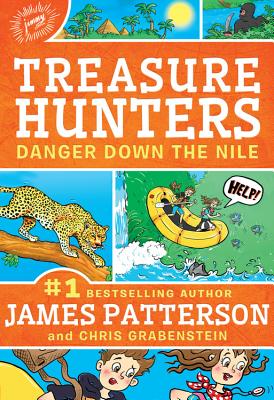 This is book number 2 in the Treasure Hunters series.

The sequel to James Patterson's Treasure Hunters is another hilarious, hair-raising and highly-illustrated adventure for the First Family of Action!
Bick Kidd and his globe-trotting siblings Beck, Storm and Tommy may have completed their first treasure hunt after their father was lost at sea, but their kidnapped mother is still in the hands of nasty pirates. Their search for a rescue plan takes them down the Nile river in Africa, where they'll have to navigate everything from Egyptian pyramids in the desert to wet-and-wild jungles-not to mention life-threatening encounters with wilderness diseases, angry hippos and some seriously bad guys-in order to find the treasure and save the day.
James Patterson received the Literarian Award for Outstanding Service to the American Literary Community from the National Book Foundation. He holds the Guinness World Record for the most #1 New York Times bestsellers, including Middle School, I Funny, and Jacky Ha-Ha, and his books have sold more than 350 million copies worldwide. A tireless champion of the power of books and reading, Patterson created a children's book imprint, JIMMY Patterson, whose mission is simple: "We want every kid who finishes a JIMMY Book to say, 'PLEASE GIVE ME ANOTHER BOOK.'" He has donated more than one million books to students and soldiers and funds over four hundred Teacher Education Scholarships at twenty-four colleges and universities. He has also donated millions of dollars to independent bookstores and school libraries. Patterson invests proceeds from the sales of JIMMY Patterson Books in pro-reading initiatives.

Praise for Treasure Hunters: Danger Down the Nile:
A New York Times bestseller!

"Short chapters, copious illustrations, and a rollicking, nonstop plot....The fiercely loyal Kidds and a healthy dose of humor... make this fun-filled adventure series stand out.... It's hard to imagine the adventure-loving reader who wouldn't be hooked by this series."

"The second volume in the accessible Treasure Hunters series offers the same likable heroes, high-octane adventures, and pun-rich humor as the first. Literary popcorn and fun for young readers."—Booklist

"This new series promises it all: ruthless pirates, CIA spies, terrorists, stolen works of art and priceless treasure. More important, it delivers. A high-seas adventure that will entice even the most confirmed of landlubbers."—Kirkus Reviews

"A frenetic sense of excitement and adventure permeates this nautical escapade... There's little time to breathe as the Kidds pinball from one spot of trouble to the next, making for a fun and fast-paced ride."—Publishers Weekly