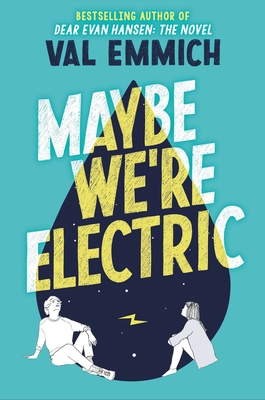 
In Stock—Click for Locations
From Val Emmich, the bestselling author of Dear Evan Hansen: The Novel, comes a deeply affecting story of two teens who find themselves thrown together overnight during a snowstorm and discover a surprising connection—perfect for fans of Nina LaCour, David Arnold, and Robin Benway.

Tegan Everly is quiet. Known around school simply as the girl with the hand, she's usually only her most outspoken self with her friend Neel, and right now they're not exactly talking. When Tegan is ambushed by her mom with a truth she can't face, she flees home in a snowstorm, finding refuge at a forgotten local attraction—the tiny Thomas Edison museum.

She's not alone for long. In walks Mac Durant. Striking, magnetic, a gifted athlete, Mac Durant is the classmate adored by all. Tegan can't stand him. Even his name sounds fake. Except the Mac Durant she thinks she knows isn't the one before her now—this Mac is rattled and asking her for help.

Over one unforgettable night spent consuming antique records and corner-shop provisions, Tegan and Mac cast aside their public personas and family pressures long enough to forge an unexpectedly charged bond and—in the very spot in New Jersey that inspired Edison's boldest creations—totally reinvent themselves. But could Tegan's most shameful secret destroy what they've built?

Emotionally vivid and endlessly charming, Maybe We're Electric is an artfully woven meditation on how pain can connect us—we can carry it alone in darkness or share the burden and watch the world light up again.
Val Emmich is a New York Times bestselling author, singer-songwriter, and actor. His novels include The Reminders and Dear Evan Hansen: The Novel, the adaptation of the hit Broadway show.
"A poignant, gemlike novel about grief, regret, and loneliness. Tegan's story is emotionally vivid, poetically crafted, and utterly moving."—Kathleen Glasgow, New York Times-bestselling author of Girl In Pieces

"Val Emmich's Maybe We're Electric is a beautifully rendered portrait of two complicated teens who find the secrets to unlocking their authentic selves through an unexpected connection. Written with tenderness and heart, this is a book that will light readers up."—Abdi Nazemian, author of Stonewall Honor book Like a Love Story

"Emmich captures the excruciating self-consciousness and lacerating self-talk of adolescence, magnified and relentlessly scrutinized through social media ... An immersive, compassionate tale about coming of age in a single night."—Kirkus