Sonrisas for Baby: A Little Book of Smiles (Board book) 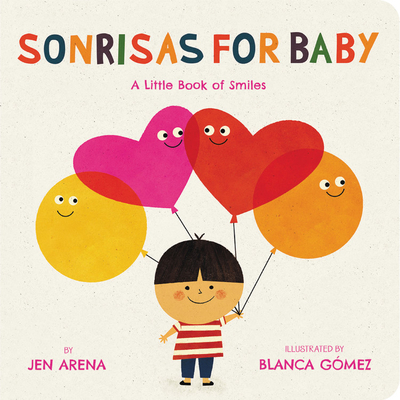 Sonrisas for Baby: A Little Book of Smiles (Board book)


In Stock—Click for Locations
This sweet English/Spanish bilingual board book proves that smiles can brighten any day. Everyone has smiles for baby -- from un amigo to la familia to la rana and un pez, in this charming board book that gently infuses easy Spanish vocabulary into the text. The spare and simple Spanish is accessible for both bilingual parents and those who wish to introduce Spanish to their little ones. Either way, parents won't be able to resist giving muchas sonrisas as they share this bilingual read aloud, filled with bold, graphic illustrations, with their little bébé!
Formerly an editorial director at Random House BFYR, Jen Arena has written over 50 books for kids, including fiction and nonfiction, licensed and original. Her books have been published by Knopf, Roaring Brook, Scholastic, Kane Press, Grosset & Dunlap, DK, Two Lions, Bearport Publishing, and Little Brown and translated into French, Spanish, Korean, and Arabic.