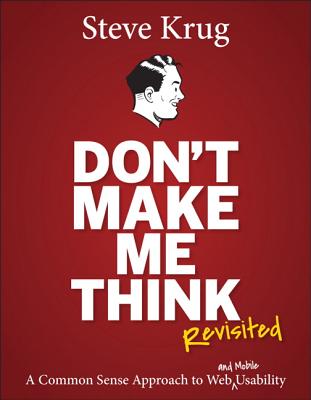 
Special Order—Subject to Availability
Since Don't Make Me Think was first published in 2000, hundreds of thousands of Web designers and developers have relied on usability guru Steve Krug's guide to help them understand the principles of intuitive navigation and information design. Witty, commonsensical, and eminently practical, it's one of the best-loved and most recommended books on the subject. Now Steve returns with fresh perspective to reexamine the principles that made Don't Make Me Think a classic-with updated examples and a new chapter on mobile usability. And it's still short, profusely illustrated...and best of all-fun to read. If you've read it before, you'll rediscover what made Don't Make Me Think so essential to Web designers and developers around the world. If you've never read it, you'll see why so many people have said it should be required reading for anyone working on Web sites.
"After reading it over a couple of hours and putting its ideas to work for the past five years, I can say it has done more to improve my abilities as a Web designer than any other book."
-Jeffrey Zeldman, author of Designing with Web Standards
Steve Krug (pronounced kroog) is best known as the author of Don't Make Me Think: A Common Sense Approach to Web Usability, now in its second edition with over 350,000 copies in print. Ten years later, he finally gathered enough energy to write another one: the usability testing handbook Rocket Surgery Made Easy: The Do-It-Yourself Guide to Finding and Fixing Usability Problems. The books were based on the 20+ years he's spent as a usability consultant for a wide variety of clients like Apple, Bloomberg.com, Lexus.com, NPR, the International Monetary Fund, and many others. His consulting firm, Advanced Common Sense (just me and a few well-placed mirrors) is based in Chestnut Hill, MA. Steve currently spends most of his time teaching usability workshops, consulting, and watching old episodes of Law and Order.