Latin America in the 1930s: The Role of the Periphery in World Crisis (St Antony's) (Hardcover) 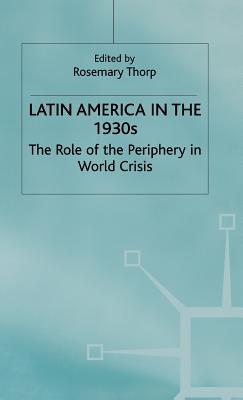 Latin America in the 1930s: The Role of the Periphery in World Crisis (St Antony's) (Hardcover)


Not On Our Shelves—Ships in 1-5 Days
(This book cannot be returned.)
This is the new edition of the highly acclaimed Latin America in the 1930s, a text which has proved invaluable for teachers, researchers and students alike. The second edition has been revised and updated, including a new preface and updated statistical material, to form the second volume in An Economic History of Twentieth-Century Latin America . This book confronts the puzzle of Latin America's rapid recovery from the collapse in world markets and capital flows in the late 1920s. It shows how far the safety valves which made recovery possible in the 1930s were not available fifty years later. It documents the impact of crisis on the changing role of the state and on institutional development. The Central American case studies have been updated with significantly improved data.
ROSEMARY THORP is Reader in the Economics of Latin America at the University of Oxford, Director of the Latin American Centre and a Fellow of St Antony's College and the Chair of Oxfam. Recent publications include Progress, Poverty and Exclusion: An Economic History of Latin America in the Twentieth Century.