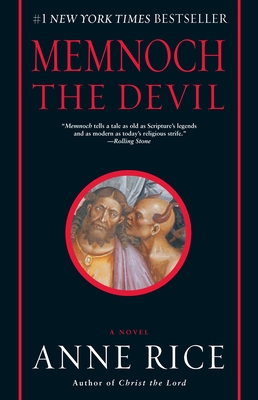 This is book number 5 in the Vampire Chronicles series.

"STARTLING. . . FIENDISH. . . MEMNOCH'S TALE IS COMPELLING."
--New York Daily News
Like Interview With the Vampire, Memnoch has a half-maddened, fever-pitch
intensity. . . Narrated by Rice's most cherished character, the vampire Lestat, Memnoch tells a tale as old as Scripture's legends and as modern as today's religious strife.
--Rolling Stone
"SHOCKING. . . A BRILLIANT BOOK."
--St. Louis Post Dispatch
"Rice has penned an ambitious close to this long-running series, as well as a classy exit for a classic horror character. . Fans will no doubt devour this last visit with Lestat."
--The Washington Post Book World
"MEMNOCH THE DEVIL OFFERS PASSAGES OF POETIC BRILLIANCE."
--Playboy
"[Memnoch] is one of Rice's most intriguing and sympathetic characters to date. . . Rice ups the ante, taking Lestat where few writers have ventured: into heaven and hell itself. She carries it off in top form."
--The Seattle Times
"RICHLY DESCRIPTIVE. . . A HORRIFIC TOUR OF HELL."
--Kirkus Reviews (starred)

A MAIN SELECTION OF THE BOOK-OF-THE-MONTH CLUB
AND THE QUALITY PAPERBACK BOOK CLUB
Anne Rice is the author of thirty-seven books, including the Vampire Chronicles, the Lives of the Mayfair Witches, and the Wolf Gift book series. Rice was born in New Orleans in 1941 and grew up there and in Texas. She lived in San Francisco with her husband, the poet and painter, Stan Rice until 1988, when they returned to New Orleans to live with their son, Christopher. In 2006, Rice moved to Rancho Mirage, California. She died in 2021.