The Sword of Shannara Trilogy (Hardcover) 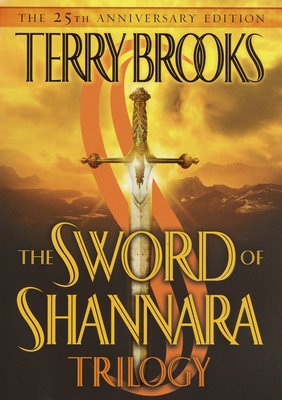 The Sword of Shannara Trilogy (Hardcover)


Backordered
For the first time in one elegant collector’s edition hardcover, and featuring an introduction by New York Times bestselling author Terry Brooks, here are the first three novels of that classic series: The Sword of Shannara, The Elfstones of Shannara, and The Wishsong of Shannara—the beginning of a phenomenal epic of good and evil.

The Sword of Shannara
Long ago, the wars of the ancient Evil ruined the world. In peaceful Shady Vale, half-elfin Shea Ohmsford knows little of such troubles. But the supposedly dead Warlock Lord is plotting to destroy everything in his wake. The sole weapon against this Power of Darkness is the Sword of Shannara, which can be used only by a true heir of Shannara. On Shea, last of the bloodline, rests the hope of all the races.

The Elfstones of Shannara
The magical Ellcrys tree is dying, loosening the spell that bars the Demons from enacting vengeance upon the land. Now Wil Ohmsford must guard the Elven girl Amberle on a perilous quest as she carries one of the Ellcrys’ seeds to a mysterious place where it can be quickened into a powerful new force. But dark on their trail comes the Reaper, most fearsome of all Demons, aiming to crush their mission at any cost.

The Wishsong of Shannara
An ancient Evil is stirring to new life, sending its ghastly Mord Wraiths to destroy Mankind. To win through the vile growth that protects this dark force, the Druid Allanon needs Brin Ohmsford—for she alone holds the magic power of the wishsong. Reluctantly Brin joins the Druid on his dangerous journey. But a prophecy foretells doom, as Evil nurses its plans to trap the unsuspecting Brin into a fate far more horrible than death.

Thus begins Terry Brooks’s thrilling Shannara epic, an unforgettable tale of adventure, magic, and myth.
Terry Brooks has thrilled readers for decades with his powers of imagination and storytelling. He is the author of more than thirty books, most of which have been New York Times bestsellers. He lives with his wife, Judine, in the Pacific Northwest.
The Voyage of the Jerle Shannara: Ilse Witch
“If Harry Potter has given you a thirst for fantasy and you have not discovered the magic of Terry Brooks, you are in for a treat.”
–Rocky Mountain News


The Voyage of the Jerle Shannara: Antrax
“Antrax is great, and it confirms Terry’s place at the head of the fantasy world.”
–PHILIP PULLMAN
Author of The Golden Compass and The Amber Spyglass