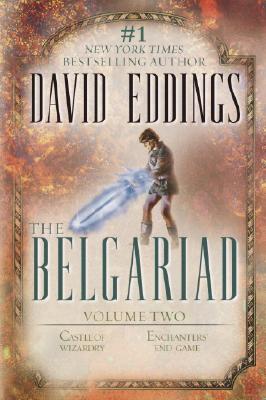 This is book number 2 in the The Belgariad series.

David Eddings’ acclaimed series, The Belgariad, reaches its stunning conclusion in these final two gripping novels. Continue on this magnificent journey and be entranced by a saga of strange lands and peoples, of prophecy and strife set against the background of a seven-thousand-year war of men, Kings, and Gods.

The quest may be nearing its end, but the danger continues. After discovering a shocking secret about himself he never could have imagined—all in pursuit of the legendary Orb—Garion and his fellow adventurers must escape a crumbling enemy fortress and flee across a vast desert filled with ruthless soldiers whose only aim is to destroy them. But even when the quest is complete, Garion’s destiny is far from fulfilled. For the evil God Torak is about to awaken and seek dominion. Somehow, Garion has to face the God, to kill or be killed. On the outcome of this dread duel rests the future of the world. But how can one man destroy an immortal God?

DAVID EDDINGS published his first novel, High Hunt, in 1973, before turning to the field of fantasy with The Belgariad. He now lives with his wife and collaborator, Leigh, in Nevada. As a writing team, David and Leigh are the authors of The Redemption of Althalus and Regina’s Song.
“Fabulous . . . Eddings has a marvelous storyteller style . . . exceedingly well portrayed and complex people. . . . More! More! More!”
–ANNE MCCAFFREY