Island People: The Caribbean and the World (Paperback) 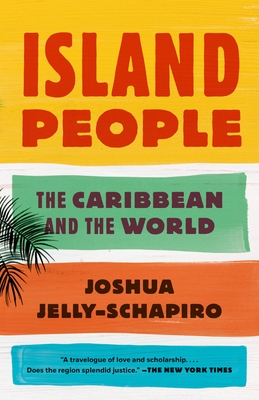 Island People: The Caribbean and the World (Paperback)

This masterwork of travel literature and history provides a kaleidoscopic portrait of the Caribbean and illuminates its fierce grip on the world's imagination.

From the moment Columbus gazed out from the deck of the Santa María in 1492 at what he mistook for an island off Asia, the Caribbean has been subjected to the misunderstandings and fantasies of outsiders. Forged by more than three centuries of mass migration and slave labor, the region and its diverse peoples have helped shape the modern world—through politics, religion, economics, music, and culture. Joshua Jelly-Schapiro takes us from Cuba to Jamaica, Puerto Rico to Trinidad, Haiti to Barbados, chronicling with wit and keen insight this “place where globalization began."

Joshua Jelly-Schapiro, a geographer and writer, is a regular contributor to the The New York Review of Books who has also written for The New Yorker, New York, Harper’s, the Believer, and The Nation, among many other publications. He is the author of Island People: The Carribbean and the World, and the co-editor (with Rebecca Solnit) of Nonstop Metropolis: A New York City Atlas. He is a visiting scholar at the Institute for Public Knowledge at NYU, where he also teaches.
“A travelogue of love and scholarship. . . . [It] does the region splendid justice.” —The New York Times

“Many have tried this before—to get hold of, in its entirety, the volatile, beautiful, relentlessly shifting Caribbean. Nobody has succeeded as dazzlingly.” —Marlon James, author of A Brief History of Seven Killings

“Joshua Jelly-Schapiro possesses both a humanist’s irrepressible empathy and a journalist’s necessary skepticism. He reports carefully, researches exhaustively, cares deeply, and writes beautifully.”—Dave Eggers, author of Heroes of the Frontier

“Joshua Jelly-Schapiro’s grand book on the Caribbean is so striking in form and vision that it amounts to something new—a constant surprise.”—Hilton Als, author of White Girls

“Written with passion and joyful music in the prose, Island People will become an indispensable companion for anybody traveling to the Caribbean—or dreaming of doing so.”—Suketu Mehta, author of Maximum City: Bombay Lost and Found