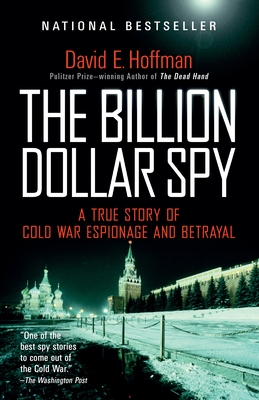 NATIONAL BESTSELLER • A Washington Post Notable Book of the Year • Drawing on previously classified CIA documents and on interviews with firsthand participants, The Billion Dollar Spy is a brilliant feat of reporting and a riveting true story of intrigue in the final years of the Cold War.

It was the height of the Cold War, and a dangerous time to be stationed in the Soviet Union. One evening, while the chief of the CIA’s Moscow station was filling his gas tank, a stranger approached and dropped a note into the car. The chief, suspicious of a KGB trap, ignored the overture. But the man had made up his mind. His attempts to establish contact with the CIA would be rebuffed four times before he thrust upon them an envelope whose contents would stun U.S. intelligence. In the years that followed, that man, Adolf Tolkachev, became one of the most valuable spies ever for the U.S. But these activities posed an enormous personal threat to Tolkachev and his American handlers. They had clandestine meetings in parks and on street corners, and used spy cameras, props, and private codes, eluding the ever-present KGB in its own backyard—until a shocking betrayal put them all at risk.

David E. Hoffman is a contributing editor at The Washington Post and a correspondent for PBS’s flagship investigative series, Frontline. He is the author of The Oligarchs and of The Dead Hand, about the end of the Cold War arms race, and winner of a Pulitzer Prize. He lives with his wife in Maryland.
Praise for David E. Hoffman’s The Billion Dollar Spy

“The Billion Dollar Spy is one of the best spy stories to come out of the Cold War and all the more riveting . . . for being true. It hits the sweet spot between page-turning thriller and solidly researched history (even the footnotes are informative) and then becomes something more, a shrewd character study of spies and the spies who run them, the mixed motives, the risks. . . . This is a terrific book.” —Washington Post

“A true-life tale so gripping at times it reads like spy fiction.” —Los Angeles Times

“A rare look at the dangerous, intricately choreographed tradecraft behind old-school intelligence gathering. . . . What [Hoffman]’s accomplished here isn’t just a remarkable example of journalistic talent but also an ability to weave an absolutely gripping nonfiction narrative.” —The Dallas Morning News

“This riveting drama. . . . packs valuable insights into the final decade of the cloak-and-dagger rivalry between the United States and the former Soviet Union. . . . A must-read for historians and buffs of that era, as well as aficionados of espionage.” —The Christian Science Monitor

“Hoffman excels at conveying both the tradecraft and the human vulnerabilities involved in spying.” —The New Yorker

“Gripping and nerve-wracking. . . . Human tension hangs over every page of The Billion Dollar Spy like the smell of leaded gasoline. . . . [Hoffman] knows the intelligence world well and has expertly used recently declassified documents to tell this unsettling and suspenseful story. . . . The Billion Dollar Spy reads like the most taut and suspenseful parts of Tinker Tailor Soldier Spy or Smiley’s People. It’s worth the clenched jaw and upset stomach it creates.” —USA Today

“Suspenseful. . . . Hoffman is a scrupulous, meticulous writer whose pages of footnotes and references attest to how carefully he sticks to his sources. . . . His book’s value is in its true-life adventure story and the window it offers into a once-closed world.” —The Columbus Dispatch

“The fine first sentence of The Billion Dollar Spy could almost have been written with an icicle. A work of painstaking historical research that’s paced like a thriller.” —Departures

“Hoffman [proves] that nonfiction can read like a John le Carré thriller. . . . This real-life tale of espionage will hook readers from the get-go.” —Publishers Weekly (starred review)

“Fascinating. . . . Hoffman’s revealing of [Adolf Tolkachev] as a person and a spy is brilliantly done, making this mesmerizing true story scary and thrilling.” —Booklist (starred review)

“Hoffman ably navigates the many strands of this complex espionage story. An intricate, mesmerizing portrayal of the KGB-CIA spy culture. . . . A thoroughly researched excavation of an astoundingly important (and sadly sacrificed) spy for the CIA.” —Kirkus Reviews

“A fabulous read that also provides chilling insights into the Cold War spy game between Washington and Moscow that has erupted anew under Vladimir Putin. . . . It is also an evocative portrait of everyday life in the crumbling Soviet Union and a meticulously researched guide to CIA sources and methods. I devoured every word, including the footnotes.” —Michael Dobbs, author of One Minute to Midnight: Kennedy, Khrushchev, and Castro on the Brink of Nuclear War

“One of the best real-life spy stories ever told. This is a breakthrough book in intelligence writing, drawing on CIA operational cables—the holy grail of the spy world—to narrate each astonishing move. Hoffman reveals CIA tradecraft tricks that are more delicious than anything in a spy novel, and his command of the Soviet landscape is masterful. Full of twists so amazing you couldn’t make them up, this is spy fact that really is better than fiction.” —David Ignatius, author of The Director

“The Billion Dollar Spy reads like the very best spy fiction yet is meticulously drawn from real life. It is a gripping story of courage, professionalism, and betrayal in the secret world.” —Rodric Braithwaite, British Ambassador in Moscow, 1988-1992

“A scrupulously researched work of history that is also a gripping thriller, The Billion Dollar Spy by David E. Hoffman is an unforgettable journey into Cold War espionage. This spellbinding story pulses with the dramatic tension of running an agent in Soviet-era Moscow—where the KGB is ubiquitous and CIA officers and Russian assets are prey. I was enthralled.” —Peter Finn, co-author of The Zhivago Affair: The Kremlin, the CIA, and the Battle Over a Forbidden Book