The Monarchs (The Ravens) (Hardcover) 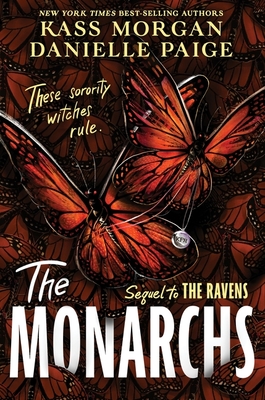 The Monarchs (The Ravens) (Hardcover)

In this thrilling conclusion to New York Times bestselling authors Kass Morgan and Danielle Paige’s The Ravens duology, loyalty, love, and friendships are tested as sorority sisters Scarlett and Vivi must face the forces of hell itself when a rival sorority threatens to wreak havoc on campus.

The ultra-exclusive Kappa Rho Nu—the Ravens—are determined to restore balance to the world. After destroying an ancient talisman and barely saving their sorority in the process, they’ll go to any lengths to keep their secret as Westerly’s most powerful coven of witches.

Scarlett Winter, a legacy Raven, has finally gotten what she’s always wanted: Scarlett is Kappa Rho Nu’s newest president. Unlike her mother or older sister before her, Scarlett has a vision for a more unified Kappa, one where no sister falls to the forces of wicked magic. But the powers of the presidency have their own pitfalls. And with the pressures of alumni bureaucracy and past failures weighing on her, Scarlett finds herself at risk of losing the very thing that defined her: her magic.

As a new member of Kappa Rho Nu, Vivi Devereaux finally knows what it’s like to belong. She has her Kappa Rho Nu sisters behind her and, with Scarlett’s blessing, Vivi’s happily dating her first college crush (who also just happens to be Scarlett’s ex). When Scarlett assigns Vivi the coveted role of social chair, Vivi is determined to live up to her Big’s expectations. But Vivi’s studies in witchcraft take a deadly turn when she uncovers a new form of magic, one that has mysterious ties to Kappa Rho Nu’s past and the vengeful demon once tied to their talisman.

With the weight of their newfound roles and the terrible price of destroying the talisman haunting them, Scarlett and Vivi must save their sisterhood when the forces of hell itself and a rival sorority threaten to unleash havoc on the Ravens.

Kass Morgan is the New York Times bestselling author of The 100, which was the inspiration for the hit CW show of the same name, and Light Years. An editor of middle grade and young adult fiction at a larger publisher, Kass received a bachelor’s degree from Brown University and a master’s degree from Oxford University. She lives in New York City.

Danielle Paige is the New York Times bestselling author of the Dorothy Must Die series and Stealing Snow, as well as an upcoming Fairy Godmother origin story series, and the graphic novel Mera: Tidebreaker for DC. In addition to writing young adult books, she works in the television industry, where she received a Writers Guild of America Award and was nominated for several Daytime Emmys. She is a graduate of Columbia University. Danielle lives in New York City.

"Conflicts surrounding interpersonal trust, reconnecting to one’s family, and a new aspect of this world’s original magic system are highlights....The first entry’s rapid pace continues here...with a storyline that never slows down before reaching a satisfying and tidy finish....Fans will certainly enjoy this duology closer." —Kirkus  —