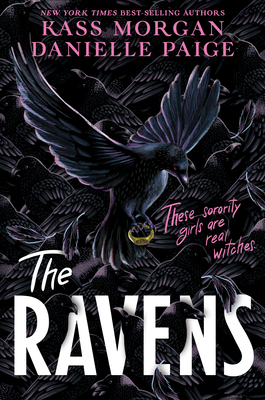 
Not On Our Shelves—Ships in 1-5 Days
From New York Times best-selling authors Kass Morgan and Danielle Paige comes a thrilling, dark contemporary fantasy about a prestigious sorority of witches and two girls caught up in its world of sinister magic and betrayals.

Scarlett Winter has always known she’s a witch—and she’s determined to be the sorority’s president, just like her mother and sister before her. But if a painful secret from her past ever comes to light, she could lose absolutely everything . . .

Vivi Devereaux has no idea she’s a witch and she’s never lived in one place long enough to make a friend. So when she gets a coveted bid to pledge the Ravens, she vows to do whatever it takes to be part of the magical sisterhood. The only thing standing in her way is Scarlett, who doesn’t think Vivi is Ravens material.

But when a dark power rises on campus, the girls will have to put their rivalry aside to save their fellow sisters. Someone has discovered the Ravens’ secret. And that someone will do anything to see these witches burn . . .

Kass Morgan is the New York Times bestselling author of The 100, which was the inspiration for the hit CW show of the same name, and Light Years. An editor of middle grade and young adult fiction at a larger publisher, Kass received a bachelor’s degree from Brown University and a master’s degree from Oxford University. She lives in New York City.

Danielle Paige is the New York Times bestselling author of the Dorothy Must Die series and Stealing Snow, as well as an upcoming Fairy Godmother origin story series, and the graphic novel Mera: Tidebreaker for DC. In addition to writing young adult books, she works in the television industry, where she received a Writers Guild of America Award and was nominated for several Daytime Emmys. She is a graduate of Columbia University. Danielle lives in New York City.

"This novel hits its story beats quickly and deftly, unfurling the plot through Scarlett’s and Vivi’s alternating points of view. The magic system is complex and original without being cumbersome, and it expertly conjures a supernatural, uncanny atmosphere intertwined with Greek life....This solid, enchanting fantasy boasts a palpable atmosphere and moves at a breakneck pace." –Kirkus   "Morgan (The 100) and Paige (the Dorothy Must Die series) blend the cloistered atmosphere of The Magicians with the Southern cattiness of The Belles, adding pops of giddy magic—“glamouring” the sorority house into a 1920s speakeasy—along the way....wonderful worldbuilding, well-executed plotting, and page-turning surprises create the feel of a bingeworthy TV show, keeping readers engaged in Vivi’s and Scarlett’s alternating narrations." –Publishers Weekly    "An intriguing mystery built upon the foundations of sisterhood." –School Library Journal    —