High: Everything You Want to Know About Drugs, Alcohol, and Addiction (Paperback) 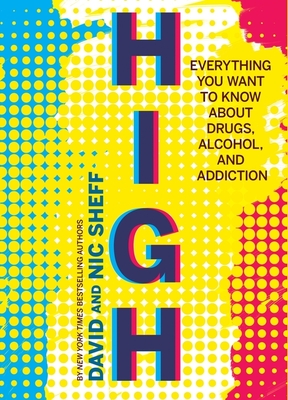 High: Everything You Want to Know About Drugs, Alcohol, and Addiction (Paperback)


On Our Shelves Now at:
“All parents should have this book on hand, and use it to open important dialogues with their kids. Arm them with knowledge.” —Ellen Hopkins, best-selling author of the Crank trilogy.

Just Say Know! With drug education for children more important than ever, this nonfiction book draws on the experiences of the New York Times best-selling father/son team, and inspiration behind the film Beautiful Boy, David and Nic Sheff to provide all the information teens need to know about drugs, alcohol, and addiction.

From David Sheff, author of Beautiful Boy (2008), and Nic Sheff, author of Tweak: Growing Up on Methamphetamines (2008), comes the ultimate resource for learning about the realities of drugs and alcohol for middle grade readers.

This book tells it as it is, with testimonials from peers who have been there and families who have lived through the addiction of a loved one, along with the cold, hard facts about what drugs and alcohol do to our bodies. From how to navigate peer pressure to outlets for stress to the potential consequences of experimenting, Nic and David Sheff lay out the facts so that middle grade readers can educate themselves.
DAVID SHEFF is the author of several books, including the #1 New York Times best-selling memoir Beautiful Boy. His writing has appeared in the New York Times, the New York Times Magazine, Rolling Stone, Playboy, Wired, and many other publications. His ongoing research and reporting on the science of addiction earned him a place on Time magazine's list of the World's Most Influential People. Sheff and his family live in the San Francisco Bay Area. Visit David at DavidSheff.com, and on Twitter @david_sheff.

Nic Sheff is the author of Tweak: Growing Up on Methamphetamines (2008), We All Fall Down: Living with Addiction (2011), and the young adult novel Schizo (2014). He is a contributor to TheFix.com, and recently wrote an episode of Netflix hit show 13 Reasons Why. He lives in Beverly Hills. Visit Nic on Twitter @nic_sheff.

"[This book] never assigns blame to users, and it discusses such topics as marijuana legalization and opioid addiction without bias."--Kirkus   "His powerful story will hopefully inspire young people in similar circumstances to seek help."--Booklist   "An informative overview of teen drug use."--School Library Journal —