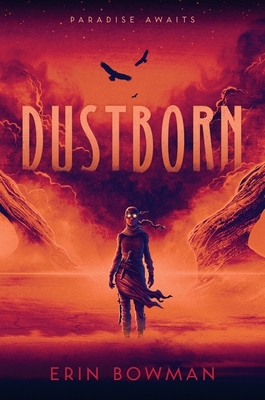 
Not On Our Shelves—Ships in 1-5 Days
Delta of Dead River sets out to rescue her family from a ruthless dictator rising to power in the Wastes and discovers a secret that will reshape her world in this postapocalyptic Western mashup for fans of Mad Max and Gunslinger Girl.

Delta of Dead River has always been told to hide her back, where a map is branded on her skin to a rumored paradise called the Verdant. In a wasteland plagued by dust squalls, geomagnetic storms, and solar flares, many would kill for it—even if no one can read it. So when raiders sent by a man known as the General attack her village, Delta suspects he is searching for her.

Delta sets out to rescue her family but quickly learns that in the Wastes no one can be trusted—perhaps not even her childhood friend, Asher, who has been missing for nearly a decade. If Delta can trust Asher, she just might decode the map and trade evidence of the Verdant to the General for her family. What Delta doesn’t count on is what waits at the Verdant: a long-forgotten secret that will shake the foundation of her entire world.


Erin Bowman is the critically acclaimed author of numerous books for children and teens, including the Taken Trilogy, Vengeance Road, Retribution Rails, the Edgar Award-nominated Contagion duology, The Girl and the Witch’s Garden, and the forthcoming Dustborn. A web designer turned author, Erin has always been invested in telling stories–both visually and with words. Erin lives in New Hampshire with her husband and children.

★ "The 100 meets Rey from Star Wars in this apocalyptic Western....Bowman sets high expectations and meets them in this standalone worthy of all YA shelves. An impeccably crafted dystopian full of beloved tropes and a generous helping of plot twists."–School Library Journal, STARRED review   "If you love dystopian novels and post-apocalyptic worlds, Dustborn by Erin Bowman deserves a prominent place on your bookshelf."–Hypable   "[An] intense, gritty, and propulsive novel....Will keep readers turning the pages."–Kirkus   "Bowman skillfully portrays the privation and grief that Delta bears, alongside her determination to overcome each obstacle. Absorbing world-building propels this fast-paced adventure, which has crossover appeal and series potential."–Publishers Weekly   "Delta is a clever and hard heroine, and the cast of characters she forms tentative alliances with along the way are as likable as they are mysterious....a satisfying ending, sure to please readers."–Booklist  "The post-apocalyptic setting is richly drawn, with harrowing escapes from dust storms across parched land and a general sense of blistering doom...Readers will be left to ponder the sometimes warring forces of hope and truth—right after they find a cool drink of water."–Bulletin of the Center for Children's Books   "[Dustborn] continually reiterates the human need for friendship, love and connection...in this captivating post-apocalyptic YA thriller."–Shelf Awareness  “With its unforgettable blend of science fiction, dystopia, and Old West, DUSTBORN is one of those stories that stays branded to your heart long after you turn the final page. Prepare to be transported.” -- Jodi Meadows, New York Times bestselling author of My Plain Jane and the Fallen Isles Trilogy —