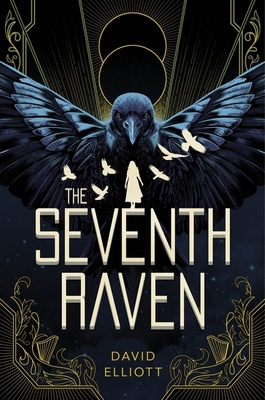 
In Stock—Click for Locations
Best-selling author David Elliott examines the timeless themes of balance, transformation, and restoration in this evocative tale about a girl who will stop at nothing to reverse a curse that turned her seven brothers into ravens.

And this is his story

When Robyn and his brothers are turned into ravens through the work of an unlucky curse, a sister is their only hope to become human again. Though she’s never met her brothers, April will stop at nothing to restore their humanity. But what about Robyn, who always felt a greater affinity to the air than to the earth-bound lives of his family?

David Elliott’s latest novel in verse explores the unintended consequences of our actions, no matter our intentions, and is filled with powerful messages teased from a Grimms’ fairy tale. Stunning black-and-white illustrations throughout by Rovina Cai.
David Elliott is the award-winning author of more than twenty-five books for young people, including the picture books Finn Throws a Fit!  and the New York Times best-selling And Here’s to You!. He is the author of the critically acclaimed verse novels, Bull, which received six starred reviews, and Voices: The Final Hours of Joan of Arc, which was shortlisted for The American Library in Paris Book Award and is the recipient of the Claudia Lewis Award for poetry. A native of Ohio, David now lives (and writes) in New Hampshire with his wife and their Dandie Dinmont terrier, Quiggy. Learn more about David by visiting davidelliottbooks.com.

★"Rich with evocative language.... Elliott (Voices) makes the propulsive mix of formal and concrete poetry and blank verse sparklingly accessible for teen readers, with repetitions and Cai’s (Elatsoe) inky illustrations weaving multiple narrators into a beautifully unified volume. Fans of lyrical retellings such as Malinda Lo’s Ash will find this bittersweet quest a warm welcome into myth and verse." –Publishers Weekly, STARRED review   ★"Elliott brings emotional depth and poignant verse to the Grimms’ 'The Seven Ravens.' This beautifully evocative tale weaves different poetry forms to great effect, achieving short, intense bursts of emotion and deep, wandering musings on identity and fate. Cai’s haunting illustrations add context and visual interest to many of the poems. Although the setting and events may belong in a fairy-tale, the core emotions of this work draw straight from reality." –School Library Journal, STARRED review   "Elliott once again is a master at poetic form....Within the elegant construction is a simple story of best intentions that reap terrible consequences and a look at how we believe our wishes for others come from a place of altruism when it is more often selfishness." –The Bulletin of the Center for Children's Books   "Elliott’s poetry is by nature taut with intensity, an effect he achieves in part through his skill with verbal rhythms, rhyme, and formal poetic structures; in part through his gimlet-eyed focus on human passion, expressed through multiple voices. He brings all this to his verse-novel interpretation of the Grimms’ tale 'The Seven Ravens,' with poetry so propulsive that it seems to cry out for oral performance." –The Horn Book Magazine   "A skillful use of verse; moral conundrums and strange plot twists offer even stronger draws." –Kirkus —