The Viking Heart: How Scandinavians Conquered the World (Paperback) 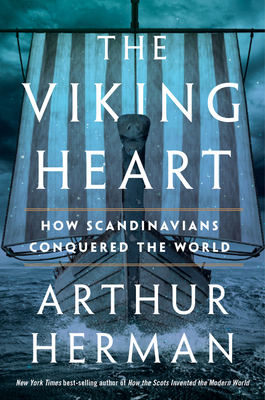 The Viking Heart: How Scandinavians Conquered the World (Paperback)

From a New York Times best-selling historian and Pulitzer Prize finalist, a sweeping epic of how the Vikings and their descendants have shaped history and America

Scandinavia has always been a world apart. For millennia Norwegians, Danes, Finns, and Swedes lived a remote and rugged existence among the fjords and peaks of the land of the midnight sun. But when they finally left their homeland in search of opportunity, these wanderers—including the most famous, the Vikings—would reshape Europe and beyond. Their ingenuity, daring, resiliency, and loyalty to family and community would propel them to the gates of Rome, the steppes of Russia, the courts of Constantinople, and the castles of England and Ireland. But nowhere would they leave a deeper mark than across the Atlantic, where the Vikings’ legacy would become the American Dream.

In The Viking Heart, Arthur Herman melds a compelling historical narrative with cutting-edge archaeological and DNA research to trace the epic story of this remarkable and diverse people. He shows how the Scandinavian experience has universal meaning, and how we can still be inspired by their indomitable spirit.

ARTHUR HERMAN is a senior fellow at the Hudson Institute and the author of nine books, including the New York Times bestseller How the Scots Invented the Modern World and Gandhi and Churchill, a finalist for the Pulitzer Prize. He lives in Washington, DC.

Amazon Best Book of the Year   “Heroic battles, sea adventures, empires rising and falling, voyages of discovery, and archaeological detective work—The Viking Heart shines brilliantly with them all. Arthur Herman triumphs with a stirring investigation of the Scandinavian influence on our times, both past and present. You won’t look at the world the same way again.”—Neal Bascomb, New York Times best-selling author of The Winter Fortress     “The experience that Arthur Herman describes of the great Scandinavian diaspora—its passionate search for freedom, its love of community, its fearlessness in the face of harsh and unforgiving environments—is a story of joy and suffering I embrace as my own (thanks to my great-grandfather, who emigrated from Sweden in 1880), and it never has been better told.”—Allen Carl Guelzo, New York Times best-selling author of Gettysburg: The Last Invasion      “A remarkably well-researched and well-written book—a must-read work both for anyone from the Nordic peoples who have so affected world history, but also for the rest of us. It is the story of how modern democracy was protected, Protestantism was saved from extinction, and kingdoms were established far from the fjords. Herman shows all the light and shade of the Viking legacy.”—Andrew Roberts, author of Churchill: Walking with Destiny     “Absorbing, eloquent, and balanced, The Viking Heart is essential reading. Arthur Herman describes a great Scandinavian historical legacy of courage, daring, loyalty, and community. If sometimes abused, these qualities continue to offer enormous value today—and never less than food for thought.”—Barry Strauss, best-selling author of Ten Caesars: Roman Emperors from Augustus to Constantine   “Herman makes a convincing case that the peoples of Scandinavia have contributed more to today’s world than they are given credit for . . . A fine history of a people who deserve more attention.”—Kirkus Reviews   “Herman expertly and delicately weaves Scandinavian history and its impact on and assimilation into communities on almost every continent over the centuries into one extremely well-researched and engaging tome. An historian with Norwegian ancestry, he provides a thoughtful, comprehensive, and multidisciplinary discussion of how the Scandinavians, through raids, exploration, conquest, and settlement changed the socioeconomic, cultural, and religious aspects of numerous societies . . . A fresh and wholly engaging reassessment of the legendary Vikings.”—Booklist   "As in Herman’s previous books, his writing is engaging and accessible and will engage fans of popular history. It doesn’t aim to be an in-depth, exhaustive history, but rather offers some highlights and bite-sized narratives that make it an excellent armchair read."—Library Journal   "Whether you’re new to Viking scholarship or a well-read medievalist, The Viking Heart has something to offer . . . The Viking Heart honestly assesses the results of the Vikings’ past actions around the world and makes an evenhanded argument for the importance of Viking culture in U.S. history.  As we wrestle with how to make our world a better, more equal place, The Viking Heart provides a framework for recognizing the importance of the past in shaping our present and future."—BookPage   “An absorbing and humane account of how th —