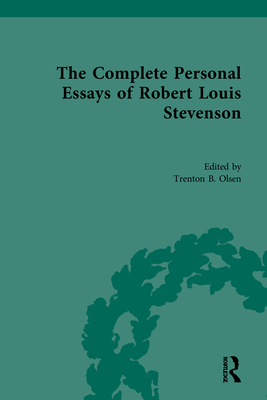 By Trenton B. Olsen (Editor)

For all of Robert Louis Stevenson's achievements in fiction, many of his contemporaries thought of him primarily as an essayist. His essays, known for their intellectual substance, emotional force, and stylistic vitality, were widely considered the best of their time. Despite the importance of Stevenson's nonfiction, his personal essays--70 in total--have never been printed together in a single volume until now.

Stevenson's essays explore a range of topics from illness and evolution to marriage and dreams, and from literal and literary travel to the behavior of children and the character of dogs. Grappling with many of the cultural, ethical, and existential questions of his age, he resists dogma to draw fresh conclusions. Stevenson examines beggars and university students, immigrants and engineers, invalids and nurses, outlining his own colorful life story and unique approach to the art of living along the way.

Whereas the most common and widely available versions of these texts were modified after Stevenson's death, this volume gathers his personal essays, many of which have never appeared in any modern edition, in their authorized versions. These essays are still considered classic models of the form, and in this volume, the Editor presents them alongside an introduction and notes to assist in a rereading and reappreciation that is long overdue.

Trenton B. Olsen is Associate Professor of English at Brigham Young University-Idaho, USA. He is the author of Wordsworth and Evolution in Victorian Literature: Entangled Influence (2019).