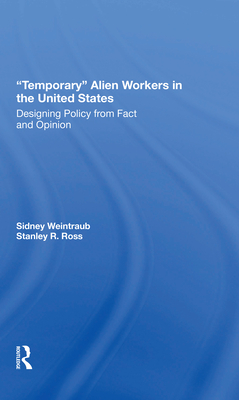 
Special Order—Subject to Availability
(This book cannot be returned.)
The most controversial and significant aspect of U.S. immigration policy concerns those persons who enter the country illegally in order to seek employment. It is known that a significant proportion of the temporary immigrants remain--authorities estimate that between three and six million undocumented aliens live permanently in the U.S., a figure that grows by the hundreds of thousands each year--but other aspects of the issue are less clear. There is no consensus about how the importation of foreign workers affects the U.S. labor market, nor about the desirability of some system to identify temporary workers living legally in the U.S. Neither is there agreement about the effect of curtailing the flow of workers from Mexico on that country's internal political structure. This book brings together current knowledge about temporary workers in the U.S. and examines the various issues that are likely to shape future policy. The authors place particular emphasis on recent proposals made by the Reagan administration and on other recommendations now under consideration by Congress. The book is not political in the sense of being for or against any particular program; rather, it seeks to clarify the many issues by setting forth what is known and by critically analyzing the options.