The Routledge Handbook of the Global Sixties: Between Protest and Nation-Building (Paperback) 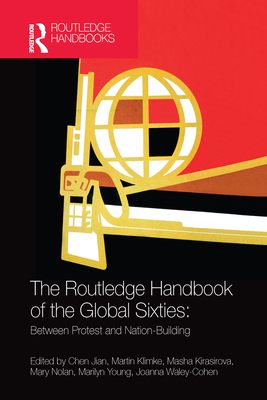 The Routledge Handbook of the Global Sixties: Between Protest and Nation-Building (Paperback)

'This extraordinary collection is a game-changer. Featuring the cutting-edge work of over forty scholars from across the globe, The Routledge Handbook of the Global Sixties is breathtaking in its range, incisive in analyses, and revolutionary in method and evidence. Here, fifty years after that iconic 1968, Western Europe and North America are finally de-centered, if not provincialized, and we have the basis for a complete remapping, a thorough reinterpretation of the Sixties.' --Jean Allman, J.H. Hexter Professor in the Humanities; Director, Center for the Humanities, Washington University in St. Louis

'This is a landmark achievement. It represents the most comprehensive effort to date to map out the myriad constitutive elements of the Global Sixties as a field of knowledge and inquiry. Richly illustrated and meticulously curated, this collection purposefully provincializes the United States and Western Europe while shifting the loci of interpretation to Africa, the Middle East, Asia, and Latin America. It will become both a benchmark reference text for instructors and a gateway to future historical research.' --Eric Zolov, Associate Professor of History; Director, Latin American & Caribbean Studies, Stony Brook University

'This important and wide-ranging volume de-centers West-focused histories of the 1960s. It opens up fresh and vital ground for research and teaching on Third, Second, and First World transnationalism(s), and the many complex connections, tensions, and histories involved.' --John Chalcraft, Professor of Middle East History and Politics, Department of Government, London School of Economics and Political Science

'This book globalizes the study of the 1960s better than any other publication. The authors stretch the standard narrative to include regions and actors long neglected. This new geography of the 1960s changes how we understand the broader transformations surrounding protest, war, race, feminism, and other themes. The global 1960s described by the authors is more inclusive and relevant for our current day. This book will influence all future research and teaching about the postwar world.' --Jeremi Suri, Mack Brown Distinguished Chair for Leadership in Global Affairs; Professor of Public Affairs and History, The University of Texas at Austin

As the fiftieth anniversary of 1968 approaches, this book reassesses the global causes, themes, forms, and legacies of that tumultuous period. While existing scholarship continues to largely concentrate on the US and Western Europe, this volume will focus on Asia, Africa, the Middle East, and Eastern Europe. International scholars from diverse disciplinary backgrounds explore the global sixties through the prism of topics that range from the economy, decolonization, and higher education, to forms of protest, transnational relations, and the politics of memory.