Monetary Policy After the Great Recession: The Role of Interest Rates (Routledge International Studies in Money and Banking) (Paperback) 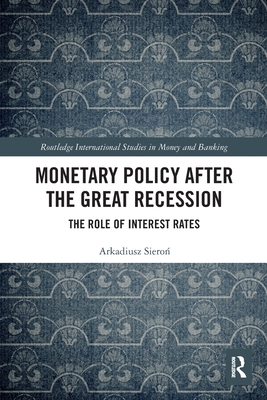 Monetary Policy After the Great Recession: The Role of Interest Rates (Routledge International Studies in Money and Banking) (Paperback)

Walter Bagehot noticed once that "John Bull can stand many things, but he cannot stand two per cent." Well, for several years, he has had to stand interest rates well below that, in some countries even below zero. However, despite this sacrifice, the economic recovery from the Great Recession has been disappointingly weak. This book's aim is to answer this question.

The central thesis of the book is that the standard understanding of the monetary transmission mechanism is flawed. That understanding adopts erroneous assumptions--such as, that low interest rates always stimulate economic growth by boosting the credit supply, investment, and consumption--and does not fully take into account several unintended channels of monetary policy, such as risk-taking, high level of debt, or zombification of the economy. In other words, the effectiveness of monetary policy is limited during economic downturns accompanied by the debt overhang and the balance sheet recession, and generates negative effects, which can make the policy counterproductive.

The book is written in an accessible and engaging manner and will be a valuable resource for scholars of monetary economics as well as readers interested in (unconventional) monetary policy.

Arkadiusz Sieroń received the title of Doctor of Economic Sciences in 2016; and has been an assistant professor at the University of Wroclaw since 2017. He is a board member of the Polish Mises Institute of Economic Education and author of several dozen scientific publications (including in such periodicals as the "Prague Economic Papers," "Quarterly Journal of Austrian Economics," and "Research in Economics"). He received scholarships at The Ludwig von Mises Institute in America (2014 and 2018 Summer Fellowships), won the 2018 Lawrence W. Fertig Prize for the best paper advancing economic science in the Austrian tradition in 2017, and placed third in the sixth International Vernon Smith Prize for the Advancement of Austrian Economics.