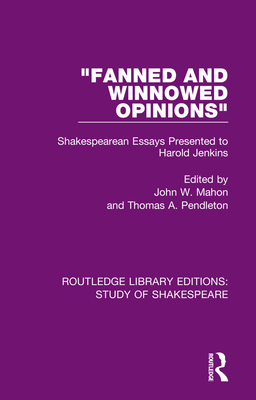 Originally published in 1987, "Fanned and Winnowed Opinions" celebrates the scholarship of Professor Harold Jenkins, one of this century's foremost editors and critics of Shakespeare. All of the essays address Shakespearean topics, and many of the sixteen focus on the years between 1595 and 1605, the period on which much of Professor Jenkin's work centers: there are, appropriately, three essays on Hamlet. A variety of critical approaches is represented, including the Freudian and the feminist; some essays focus on one play, while others take a thematic approach. Comedies, histories, and tragedies all come under consideration.

The contributors include many distinguished scholars, some of whom studied under Professor Jenkins or edited volumes of the Arden Shakespeare under his direction. All of the contributions were specifically written for the Festschrift and had not appeared in print before. In addition to the scholarly essays, the volume features an introduction with an appreciative review of Harold Jenkins' career and a complete bibliography of his works.