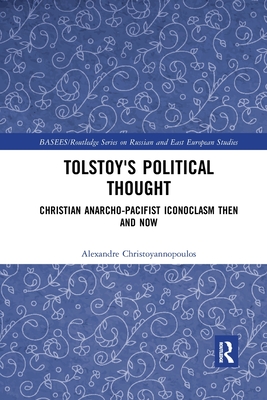 Leo Tolstoy (1828-1910), besides writing famous novels such as War and Peace, also wrote on political issues, especially later in his life, putting forward a political philosophy which might be termed 'Christian anarchism'. This book provides a comprehensive overview of Tolstoy's political thought. It outlines in a systematic way Tolstoy's thought, which was originally articulated unsystematically in diverse, often informal writing, such as pamphlets, letters, and speeches, as well as books, and in his novels, where Tolstoy's thinking is put forward implicitly through the novels' characters. The book sets out the basic themes of Tolstoy's political thought: his acceptance of the teachings of Jesus, his criticism of the way in which Jesus' teachings have been relayed by the church through traditional creeds and dogma, his passionate rejection of political violence by both the state and those working for reform, his plea for a nonviolent response to violence and injustice, and his call for society to forego its institutional shackles and enact a community of peace, love, and justice. The book also includes background information on the Russia of Tolstoy's time, including the religious context, and a discussion of how Tolstoy's political thought has been received by his admirers, who included Gandhi, and his critics.

Alexandre Christoyannopoulos is a senior lecturer in politics and international relations at the School of Social Sciences and Humanities of Loughborough University.