Lost to the World: A Memoir of Faith, Family, and Five Years in Terrorist Captivity (Hardcover) 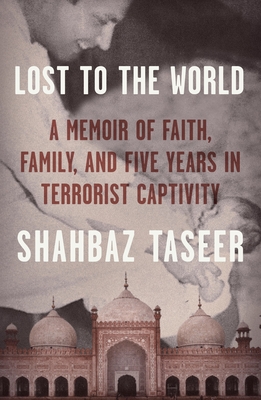 Lost to the World: A Memoir of Faith, Family, and Five Years in Terrorist Captivity (Hardcover)

Shahbaz Taseer’s memoir of his five-year-long captivity at the hands of the Islamic Movement of Uzbekistan.

In late August 2011, Shahbaz Taseer was dragged from his car at gunpoint and kidnapped by members of the Islamic Movement of Uzbekistan (IMU), a Taliban-affiliated Uzbek terrorist group. Taseer’s father, the governor of Punjab, Pakistan, had recently been assassinated for speaking in support of a Christian woman who had been accused of blasphemy and sentenced to death. Though Taseer himself wasn’t involved in politics, he was still a public figure who represented a more tolerant, internationally connected Pakistan that the IMU condemned. What followed his kidnapping was nearly five years of torture and constant peril as Taseer was held captive by the IMU in the ungoverned reaches of Pakistan and Afghanistan, his fate subject to the unpredictable whims and machinations of terrorists. Lost to the World is his memoir of that time—a story of extraordinary sorrow but also of empathy and faith.

While deeply harrowing, this tale is also about resilience. Taseer countered his captors’ narrative of a holy war by immersing himself in the Quran in search of hope and a means to see his own humanity under even the most inhumane conditions, and ultimately to find a way back to his family.

Shahbaz Taseer is a Pakistani businessman and the son of the late governor of Punjab, Pakistan. Taseer was held in captivity for almost five years and was recovered from Kuchlak, Balochistan, on March 8, 2016. His kidnapping was referred to by The Guardian as one of the highest-profile kidnappings in Pakistan.